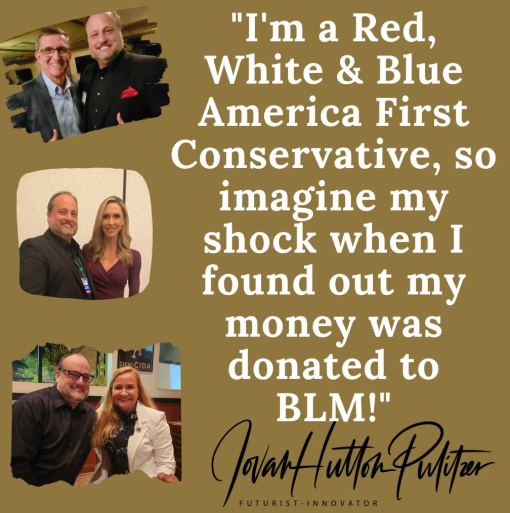 Jovan is a Brillant man and a STELLAR Patriot

When I found out I wanted to puke, my own money was donated to Black Lives Matter!

A bullet to the head I would willingly take for my children, my grandchildren and my country. My patriotism is unwavering, but when I found out my own money – hard earned money – was donated directly to Black Lives Matter – I felt like I wanted to throw-up.

They in no way disclosed my money would fund Marxism

If I had known sooner, I would have never given them another dime of my money.

Thanks for reading JovanHuttonPulitzer’s Newsletter! Subscribe for free to receive new posts and support my work.

Who in their right mind would fund the destruction of our great nation?

When I dug deeper into the way this could have happened, it went back to one administration which paved the way to the final countdown for the destruction of the United States of America.

Behind closed doors, planned long ago, was the take down of America. It has been 14 years since Obama was placed in the Whitehouse. My soul of souls now clearly understands he was the sleeper who was selected to drive the wooden stake into the heart of America. It was a methodical, patient, well-orchestrated plan to tear apart the fibers of our great nation by turning our great nation inside out, from the inside out.

Their plan was simple really.

The left already controlled the media and had sleepers placed within our government. All that was left was to get control of the banks, the big corporations and the big non-profits!

Now, here we sit, 14 years after Obama was installed and with the 16 years prior laying the foundation (Clinton/Bush years), we are now witnessing the pulling of the trigger placed against the temple of America’s head. BOOM! The time has arrived.

Our own government flaunts its sickness in our faces and now they are after our children.

The worst part about all of the above is they use our own money against us in their plan to take over the United States of America.

To explain how this works and how they are using our own hard-earned money against us is a whole book to study, but I did record an hour presentation which will give you and initial education in how their system works.

If you take the time to watch the video, your eyes will be opened wide to how they used all of us to fulfill their evil plan for our future, our children and our grandchildren.

HOWEVER, we can put a stop to this by undertaking such a simple step it is almost too simple!

Let’s say there was a glass of water on the table, and you were powerfully thirsty. Naturally you would want to drink it. However, when you drank that water, you had no idea it would enslave your children and grandchildren in the future.

YOU LOGICALLY WOULD AVOID THAT PARTICULAR GLASS OF WATER!

The way we defeat those who are destroying our nation is EXACTLY that simple.

Consider watching the video link I posted above, or if you want to just jump to it, then visit the website I have published called MakeWokeGoBroke give my team some simple info and we will personally contact you and walk you through taking your money way from these WOKE CORPORATIONS, while at the very same time helping Save America from Socialism.

Nothing is easy in life. Nothing is easy in fighting this war for our future, but I promise you this is so painfully easy to do and put those Woke, RAT-BASTARDS who are stealing our future in their place – you will wonder “Why did I not do this sooner?”

Folks, get going – we have a country to save!

Thanks for reading JovanHuttonPulitzer’s Newsletter! Subscribe for free to receive new posts and support my work.