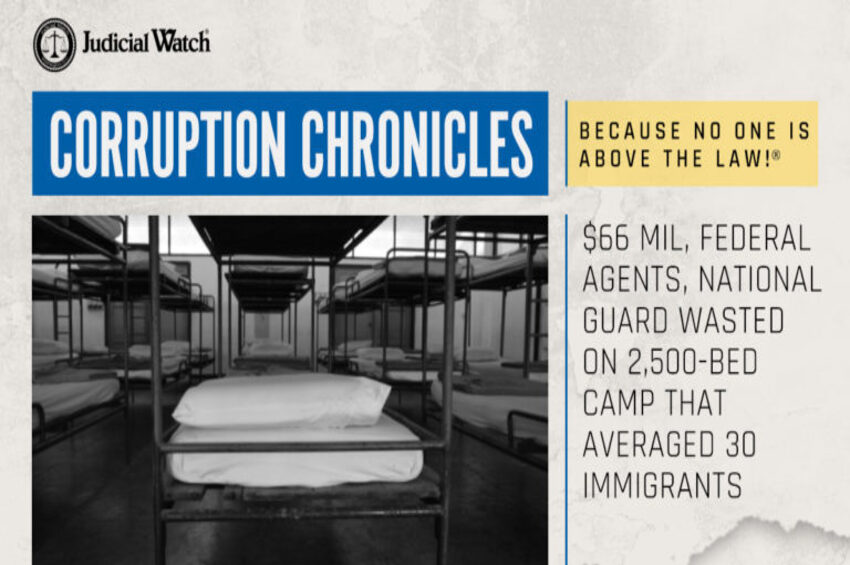 Against the advice of frontline agents, the federal government opened a temporary immigration detention facility that was barely used and cost a ghastly $66 million to operate for just five months. During that time the tent encampment situated in a rural west Texas community near the Mexican border housed an average of just 30 detainees, according to a scathing federal audit that blasts the Department of Homeland Security (DHS) for the waste. Though it has a 2,500-person capacity, the facility never held more than 66 illegal aliens on any given day, investigators from the Government Accountability Office (GAO) found.

Not only did Customs and Border Protection (CBP) pay a private contractor tens of millions of dollars in facility costs, it spent “about $5.3 million for food services—the preparation and delivery of meals and snacks—it did not need,” the congressional probe reveals. In an enraging example, investigators write that, during the first three months, the government paid for about 675,000 meals despite ordering only 13,428 because there were not enough detainees. The U.S. also “leveraged significant federal personnel resources” that added up to an additional $6.7 million. This includes 75 unarmed guards to monitor the camp around the clock and officers from DHS agencies such as CBP, the Border Patrol (BP), Immigration and Customs Enforcement (ICE) as well as soldiers from the National Guard. Investigators did the math and figured that each illegal immigrant detainee that stayed at the camp was guarded by four soldiers, three security guards and at least one CBP agent. The resources “could have been allocated to other missions,” the GAO writes in its report.

Here is a breakdown of the federal officers wasted on this seldom-used immigrant detention camp in addition to the separately paid contract security guards. Twenty-one CBP agents responsible for facility operations, such as detainee intake, welfare checks and transportation, among other things. Eleven BP agents from the El Paso sector, one of the nation’s busiest, 10 CBP officers from the Office of Field Operations and five ICE agents to help coordinate on decisions made about individuals at the facility. On top of all that, 116 Texas National Guard soldiers were deployed to the encampment for logistical support such as meal distribution and monitoring security cameras, among other duties.

The facility in the El Paso County town of Tornillo was once used to detain illegal immigrant minors and was briefly reopened for single adults around the beginning of August 2019. It finally closed at the start of 2020, but not without fleecing American taxpayers. It’s not like the government didn’t have opportunities to shut it down earlier. In fact, initially the camp was only supposed to open for three months at a cost of $47 million and could have been closed based on the numbers—less than 1% of capacity. Instead, the feds extended the deal for two months at a cost of $19 million. “Border Patrol officials in the El Paso sector told us that the sector recommended to Border Patrol headquarters that the facility be closed and resources reallocated elsewhere for other CBP missions, due to the consistently low numbers of individuals held at the facility and the personnel resource requirements to operate the facility,” the GAO report states.

But, as we regularly see in government, there is often little consensus—or cooperation—among agencies, even when they exist under the same umbrella. In this case the DHS, the gargantuan agency created after 9/11 to prevent another terrorist attack. Congressional investigators write that CBP pushed to keep the Tornillo camp open though it was hardly used. The 60,000-employee agency is charged with keeping terrorists and their weapons out of the U.S. while facilitating lawful international travel and trade and apparently it pulled more weight than the frontline BP agents. “In contrast, CBP headquarters officials told us, despite the consistently low numbers of detainees held in the Tornillo facility, they decided to continue operations for the 2,500-person facility because they were operating in an environment with considerable uncertainty related to migrant flow and wanted to prepare for the possibility of increased apprehensions,” the report says.