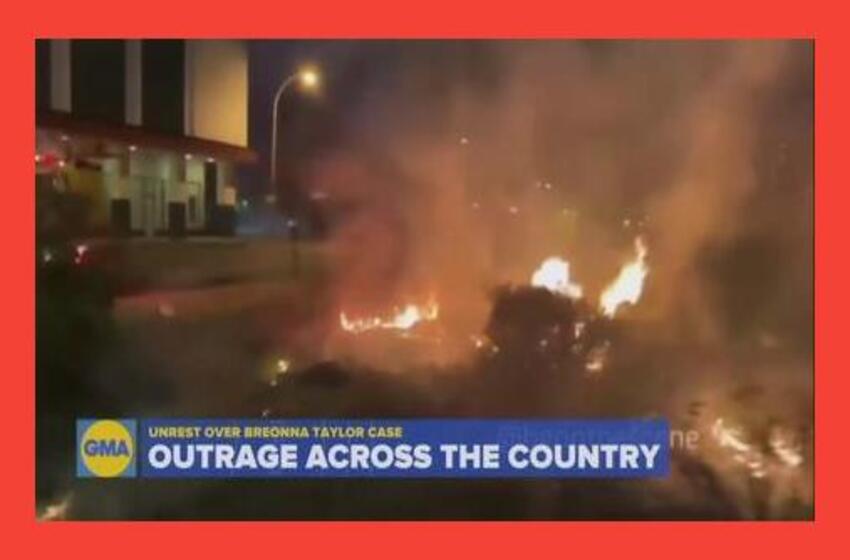 Kristine Marsh  September 24th, 2020
Protests and riots broke out in major cities across the country Wednesday night over a grand jury’s decision to not file homicide charges against the officers involved in the shooting death of Breonna Taylor. As CNN incited that mob violence hours before, ABC and CBS tried to downplay it the next morning, even calling the riots “mostly peaceful.” On ABC’s Good Morning America, co-anchor Michael Strahan and Robin Roberts downplayed the violent actions of left-wing radicals in multiple cities assaulting police officers, as “mostly peaceful:”

MICHAEL STRAHAN: Americans are reacting to the explosive ruling across the country. Protests taking over streets in major cities from coast to coast. Mostly peaceful, but in Breonna’s hometown, some pockets of violence erupting in Louisville.

Roberts repeated this “mostly peaceful” line in the second hour of GMA. Throwing multiple molotov cocktails at police doesn’t sound “peaceful.” Later on, Strahan again minimized the violence by insisting some protests were “peaceful” but others were “not,” while speaking to Breonna Taylor’s family’s lawyer Benjamin Crump.

ABC Reporter Alex Perez’s report detailed some of these “pockets” of violence in Louisville:

A busy night of clashes between police and protesters here. The reaction to the grand jury decision was immediate. Crowds taking to the streets. Overnight, demonstrators taking to the streets in Louisville, clashing with police, setting multiple small fires and smashing a bus stop in the downtown area. Officers arresting almost 100 people. At least two Louisville officers shot. One undergoing surgery after being struck in his abdomen. The other shot in the thigh. The Kentucky governor deploying the National Guard to the city after the mayor declared a state of emergency ordering a 72-hour overnight curfew.

Well, attempted murder, arson, and property destruction doesn’t really sound like isolated violence. ABC’s report (and CBS’s) also left out BLM activists in Louisville hurling death threats against officers and chanting they’ll “burn it down” as the ruling came out.

On CBS This Morning, co-anchor Gayle King tried to walk a line between downplaying the violence and condemning it. The show opened with King’s tease, “Outrage and grief: Louisville erupts after a decision in the death of Breonna Taylor. Two Louisville police officers were shot following a mostly peaceful day of protests.”

King and her co-anchor Anthony Mason again weirdly touted how “peaceful” these protests were while mentioning the officers shot:

GAYLE KING: A lot of people still reeling over the decision yesterday. That’s where we begin. There’s a lot of anger in the country over a grand jury’s decision in the Breonna Taylor case that’s left two Louisville police officers in the hospital. They were shot last night during the protests. That is not okay. After two officers involved in Taylor’s death were not charged. Now the shootings marred what had been a largely peaceful demonstration of outrage in a city where a state of emergency had been declared in advance.

ANTHONY MASON: Other protests across the country remained peaceful with thousands marching for change late into the night. All of this renews the call for accountability in how police deal with black Americans.

Neither network reported on footage from reporters on the ground in Seattle showing a rioter disguised in black-bloc beating a police officer in the head with a metal bat, or other acts of violence, vandalism, arson and looting around the country.

NBC’s Today show gave a straightforward report on the response in the streets and didn’t use the word “peaceful” to describe activists lobbing projectiles and shooting police officers like their peers ABC and CBS did.

CBS and ABC downplaying the violent actions of Antifa and Black Lives Matter activists was made possible through advertisers Honda, Toyota and Xfinity. Their contact information is linked so you can tell them about the biased news they’re funding.

At MRC’s NewsBusters, we cut through the hypocrisy and expose the media’s bias, bringing the truth to the American people—but without you, our efforts can only go so far.

The media is using whatever crisis it can to swing the upcoming election—they have an agenda and the truth is not part of it.

This is why NewsBusters, a program of the MRC, exists. To take on the liberal media, expose their toxic bias, and stop them in their tracks. We are part of the only organization purely dedicated to this critical mission and we need your help to fuel this fight.

Donate today to help NewsBusters continue to document and expose liberal media bias. $25 a month goes a long way in the fight for a free and fair media.