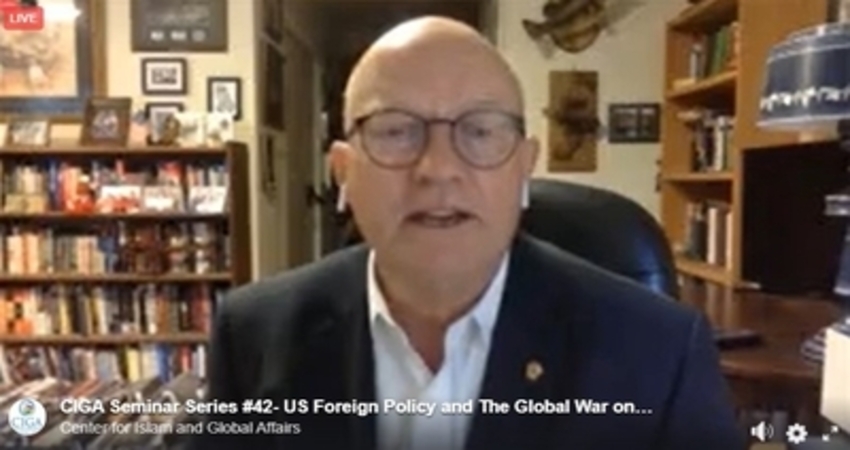 He is a retired U.S. Army colonel and once a top aide to then-Secretary of State Colin Powell. He now works as a “distinguished adjunct professor of government & public policy” at the College of William & Mary, and serves on the Military Religious Freedom Foundation’s board.

But Lawrence Wilkerson doesn’t believe the world’s only Jewish state should exist. President Truman was wrong to recognize it in 1948, he says, “based on the fact there were 400 some odd million Arabs. And about at that time, 3 maybe 4 million Israelis.”

He argues that Israel is “a strategic liability of the first order for the United States.” In 20 years, he predicts, “it probably won’t be a state. It’ll be gone.”

It is no surprise, therefore, that Sami Al-Arian, a Palestinian Islamic Jihad board member deported from the United States, sought out Wilkerson to repeat these opinions and others attacking the United States, during an online seminar Wednesday.

Wilkerson has leveled baseless, often anti-Semitic attacks on Israel and its supporters for years.

When Syria gassed its own citizens in 2013, Wilkerson quickly and loudly said it looked like a “an Israeli false flag operation.”

In a 2007 documentary, Wilkerson said Israel’s strategic value to the United States ended with the Cold War. But, “America simply cannot say, ‘Israel, you’re on your own.’ It just wouldn’t work. And one of the reasons it wouldn’t work is that we have a very powerful Jewish lobby.”

He repeated the phrase “Jewish lobby” at least twice more in the programming, saying it is driven by money. Harvard Professor Alan Dershowitz, he said, “is a Harvard professor who protects the Jewish lobby in America like an attack dog.”

Iran is a theocracy racing toward a nuclear weapon. North Korea shares the same goal and is led by an unstable dictator. But to Wilkerson, they are not the biggest threats to peace.

“Israel,” he said in a June interview posted on YouTube, “is the most likely state in the world to take the United States to Armageddon.” He lamented the presence of a U.S. air defense base in Israel, offering a hypothetical in which a Hizballah rocket fired from Lebanon strikes the base.

To Wilkerson, the problem would not be an Iranian terrorist-proxy’s attack on another country. Israel is at fault for being there to be targeted.

Ideas like these apparently were too nutty for Sen. Bernie Sanders’ 2016 presidential campaign, and Sanders used anti-Semitic Israel-basher Linda Sarsour as an official surrogate. Twice.

“I haven’t heard from them in over two weeks,” Wilkerson told the Real News Network in March 2016, “and I suspect that’s because they simply don’t want to pick up the phone and call me and tell me I’m fired.”

Al-Arian, who now runs the Center for Islam and Global Affairs in Turkey, proved to be an eager audience for Wilkerson during what was billed as a seminar about U.S. foreign policy since 9/11.

Most of the conversation condemned American foreign policy and military strategy, especially since the 9/11 attacks. Wilkerson cast the United States as a “predatory capitalist state” controlled by oil and defense contractors.

The safest bet, however, was that the conversation would not end without a section devoted to Israel-bashing. Wilkerson will tell anyone who will listen that Israel is unlikely to exist 20 years from now. Iranian press outlets were quick to promote his prediction.

Al-Arian, who was deported from the United States in 2015 as part of his guilty plea to supporting the Palestinian Islamic Jihad, made sure to ask about the claim. Al-Arian may not have predicted Israel’s demise, but he has repeatedly called for it in terms that range from diplomatic to bloodthirsty.

“Defeating and dismantling the Zionist project,” Al-Arian said during a Dec. 18 panel discussion, is required if the global Muslim community, or ummah, is ever to “attain our real independence … as long as Israel exists, the ummah will stay weak and fragmented, and disunited and divided and dependent and under control.”

That was the diplomatic example. In the 1990s, he just shouted “Death to Israel,” along with “Death to America,” at rallies he organized.

As an educated man who studies national security, it is difficult to believe that Wilkerson didn’t know about his host’s violently anti-Semitic background, or his work on behalf of a group that believes in killing Jews and creating “a state of terror, instability and panic in the souls of Zionists and especially the groups of settlers, and force them to leave their houses.”

So what pearls of wisdom did Wilkerson and Al-Arian provide Wednesday, in what was billed as a seminar on Facebook Live? Israel, they agreed, is the root cause of Middle East tension. And Wilkerson hinted that his life may be in jeopardy for saying so.

The U.S. presence in the Middle East, and all of our military interventions there, share the goal of protecting Israel, Wilkerson said. Strategists at the Pentagon and the State Department believe that keeping the region in turmoil, making it so the “Persian[s] and Arab[s] were at each other’s throats and Arab and Arab were at each other’s throats, Israel would be safe” because they would not be able to concentrate or unify against it.

Sooner or later, he said, the world will unite against Israel, and within 25 years it won’t survive.

The other factor driving American policy, Wilkerson said was the need for “a new devil” after the Soviet Union collapsed. The 9/11 attacks provided that new devil, driven by evangelical and right-wing Jewish forces.

“Wow,” Al-Arian said in a whisper. “Colonel, you have just confirmed many of the analysis that we have been talking about. You have just told us that U.S. policy has been at least 20 or plus years, because of the influence of Israel, trying to seek war – small wars – so that they would be under control, so that the Arab world or the Muslim world would not be united against Israel.”

“Wow,” he said again a few moments later. “How many public officials are willing to say that? I just salute you for being honest and straightforward with this.”

That’s when Wilkerson, without solicitation, cast his message as dangerous.

“I’m worried about my own safety, actually,” he said. “I know they are very good. I’ve recently had a couple of episodes where their tradecraft slipped a little bit so I knew that what was happening was happening. But in this country it doesn’t do you any good at all” to say such things.

Wilkerson has been pushing baseless conspiracy theories and aligning with anti-Semites for years. In 2018, he addressed a conference about “the Israel Lobby and American Policy” organized by the Washington Report for Middle East Affairs, a fringe, rabidly anti-Israel outlet.

There, he predicted that Israel would drag the United States into wars throughout the Middle East. Yet none of those predictions have come true.

Wilkerson’s doomsday projections and libeling Israel as an apartheid state are staples of his message, but he never adjusts them for what military people like to call facts on the ground.

He invoked the apartheid slur Wednesday, but ignores the presence of Islamists in Israel’s new government coalition. Israeli Arabs enjoy prominent roles in the military, the courts and in medicine.

Israel reached historic peace agreements with Egypt and Jordan. In the past year, breakthroughs were reached with Bahrain, the United Arab Emirates, Sudan, Bahrain, and Morocco. More peace agreements are expected.

None of these developments has changed Wilkerson’s belief that Israel is isolated and, ultimately, doomed.

What Me, an Anti-Semite?

The American people and their political leaders one day will turn on the Jewish state out of a revulsion to its alleged apartheid, he told Al-Arian. “Jewish rabbis” have expressed fears that American Jews will face pogroms “because of Israel.” They expressed this fear to him “over a cookie session after we finish the session in the Tabernacle.”

Oddly, that led to the one minor disagreement between the Wilkerson and Al-Arian over defining anti-Semitism.

Al-Arian said he was “having difficulty understanding the anti-Semitism part, because you can turn against Israel, but why do we equate Judaism with Israel? I mean, Israel is just a country that uses Judaism to advance its settler-colonialist policies. But I find that very dangerous. Because I don’t want to be [an] anti-Semite. But I can be anti-Israel because of its policies.”

That’s a lovely sentiment, but Al-Arian’s record tells a vastly different story. As part of his work for Palestinian Islamic Jihad, Al-Arian ran a charity called the Islamic Committee for Palestine (ICP). During the ICP’s 1991 conference, Al-Arian invoked a Quranic passage that calls Jews “monkeys and pigs.”

You can see the full clip here. In it, Al-Arian asks his audience:

Have we forgotten the Jews and who they are? God, the Glorious and Sublime, warns us of the Israelites, whom he has cursed in the Quran. ‘Those of the Children of Israel who disbelieved were cursed by David and Jesus, son of Mary; that, on account of their disobedience and their aggression. They used not to forbid one another from committing any of the evils they were committing. Evil is what they did!’

These people – whom God, the Glorious and sublime, had made into monkeys and pigs, had become discontent and angry with, had cursed in this world and in the hereafter, and had imposed a punishment on them in this World until Judgment Day – these people today hold sway over us, our people, our nation, and our future. We want to negotiate with them, to have a dialogue with them, as if we have forgotten who the Jews are, because we have distanced ourselves from our Quran, history, and heritage, and we do not understand our reality.

Good thing he doesn’t want to be an anti-Semite. At the 1990 ICP conference, Palestinian Islamic Jihad spiritual leader Abdel Aziz-Odeh said, “Allah is bringing the Jews back to Palestine in large groups from all over the world to their big graveyard, where the promise will be realized upon them, and what was destined will be carried out.”

There is no indication that Al-Arian, the rally’s organizer and host, did anything to correct the reference to the Jews’ “big graveyard.” I asked Al-Arian about it for my 1995 documentary, “Jihad in America.” He didn’t reject the message or offer any opinion at all.

“Yeah some people may say that,” he told me. “Yeah. I’ve read that. I know some people have said it.”

In April 1991, Al-Arian spoke at a fundraiser at a Cleveland mosque. His host, Fawaz Damrah, introduced Al-Arian by saying the ICP is “the active arm of the Islamic Jihad Movement in Palestine.” Al-Arian, when he spoke to the audience, did not deny the representation. Instead, he shouted, “Let us damn America. Let us damn Israel. Let us damn their allies until death.”

Al-Arian has never acknowledged – much less claimed to have broken – his involvement with the PIJ. But that didn’t stop Wilkerson, a retired U.S. Army colonel, from spending an hour with a guy who has documented service on the PIJ governing board, to share their hopes and expectations that Israel will one day vanish.