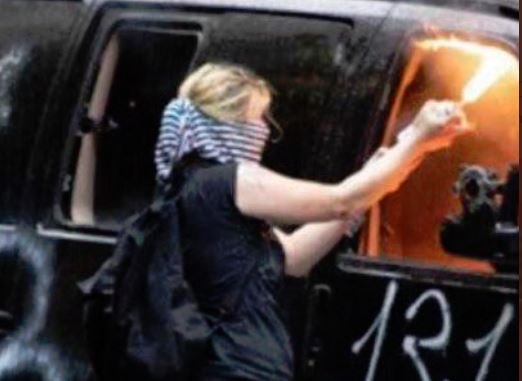 Well, they found her this week!

Margaret Aislinn Channon was arrested in Seattle after she torched five police cars during the the Black Lives Matter/Antifa riots in Seattle over George Floyd’s death.

Channon faces up to 20 years in prison.

A lot of Antifa rioters are waking up to reality

5yrs in prison per charge

“A Texas woman has been arrested on five federal accounts of arson relating to the #antifa riot in Seattle on 30 May. Margaret Aislinn Channon,25, was arrested in Tacoma” https://t.co/OI0w1quZHMpic.twitter.com/HbLZx7LvHX

A 25-year-old Tacoma woman was arrested Thursday for allegedly lighting five unmarked Seattle police vehicles on fire during riots at the end of last month.

“This defendant was captured by multiple cameras using an accelerant, lit like a blowtorch, to start fires in five vehicles,” Moran said in a statement.

Fox News reports the alleged arsons happened on May 30 around the area of Sixth Avenue and Pine Street in downtown Seattle. Local police abandoned the nearby East Precinct building, at 12th Avenue and Pine Street, earlier this week following violent protests that followed the death of George Floyd in Minneapolis on May 25. Demonstrators have moved in to the surrounding