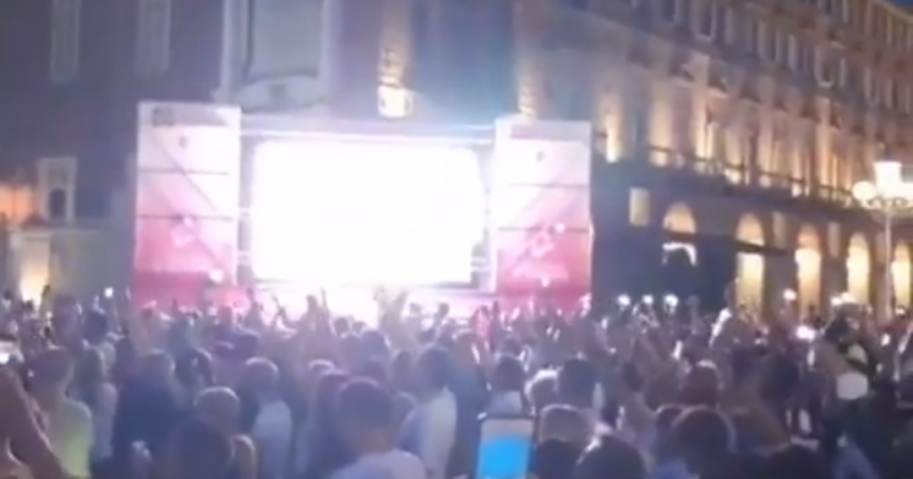 On Thursday, Italy joined France and became the second European country to impose Soviet-style restrictions on its citizens.

Italy mandated their version of a vaccine passport today, called the ‘green pass.’ This gross violation of freedom sparked a wave of massive protests across the country.

Thousands of people are gathering this evening in Turin in Italy to protest against the announcements of the Italian Prime Minister who has just announced the generalization of the health pass from August 5 in Italy. pic.twitter.com/XP0danmyr2

Just like the tens of thousands of French citizens who have been demonstrating in the streets for the past week, the Italian people were immediately outraged.

Large crowds stayed well into the night and chants for freedom and “no green pass” rang out loudly.

Protesters plan to continue the demonstrations throughout the weekend.

NOW – Thousand take it to the street in #Turin as Italy makes Covid “green pass” mandatory for most public places.pic.twitter.com/8QJnFMhjJd

The new measure forces people to show proof of vaccination if they want to engage in any of a wide range of day to day activities like eating indoors at restaurants. It also makes getting the jab compulsory for healthcare workers.

The Italian government issued the authoritarian mandates despite recent reports out of the UK and Israel that show the vaccinated account for 47% and 84% of all new covid cases, respectively.

Democrats and their drooling media sycophants love to claim that America’s vaccine hesitancy is because of ‘wild right wing conservative disinformation’ that is ‘literally killing people.’

In reality, there is a worldwide resistance to this experimental vaccine.

The mass uprisings in France, UK, Taiwan, Italy, Cuba, and many other countries, have sent that message loud and clear.

NOW – People chanting “Liberté” in Paris as they protest against mandatory vaccinations of health care workers and vaccination passports on Bastille Day (#14Juillet), a national holiday in France.pic.twitter.com/YrP4l0tXwy

Another Uprising: Thousands Protest as Italy Mandates Health Pass, Will