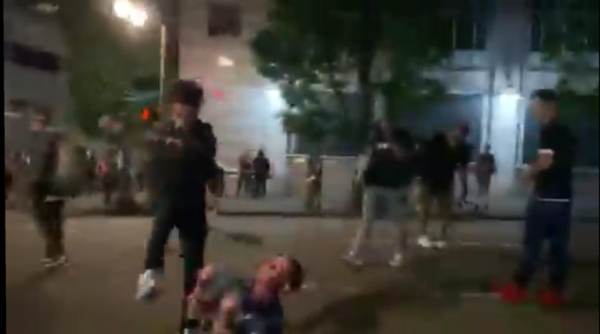 Video from Portland Sunday night shows a man being set upon by a mob of Antifa and Black Lives Matter terrorists who accused him of trying to run over protesters blocking a city street. The man’s pickup truck is seen crashed on the curb while the mob attacks him and forces him to sit in the street while they search his belongings. Punches are thrown at the man as he sits. At one point a terrorist walks up and kicks the man in the head, knocking him out cold.

No police are seen but a terrorist wearing a shirt with “SECURITY” on it orders the man around.

The terrorist mob gathers round the man’s limp body as he bleeds from his head. Voices are heard saying “call 911. Another says a “medic” is there. The mob searches the man’s truck.

The Democratic Party, through the Mayor of Portland Ted Wheeler, and the Governor of Oregon Kate Brown, are allowing Antifa and Black Lives Matter thugs to terrorize Americans with impunity.

Here are the moments shortly after the man crashes due to BLM harassment and before they knock him out in Portland pic.twitter.com/JcrJ5w3ty8

BREAKING: After causing a white man to crash his truck in downtown Portland, BLM militants then beat the man and knock him unconscious

Portland: A man accused of trying to run over protesters crashed his vehicle. BLM & Antifa militants then pull him from the car and violently assault him. pic.twitter.com/DiUbV9Mcy5

Just arrived on the scene to report on night 80 in downtown #Portland and a man crashes his car into a tree and protesters take the man out and start punching him in the face. According to witnesses on the scene he was trying to run people over. Will provide updates as they