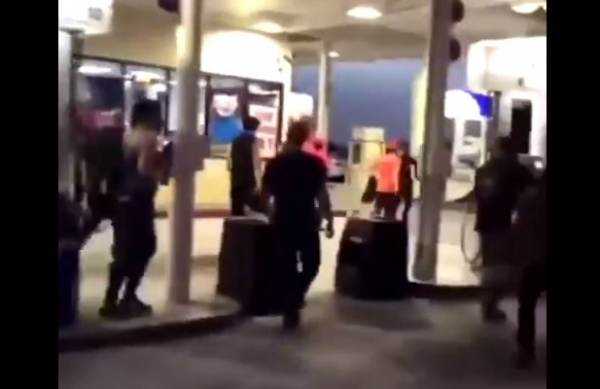 Several antifa thugs traveled to Yucaipa, California this week to try to stir up some trouble.

The men in town chased the punks and beat the snot out of them.

A small gang of Antifa thugs tried to stir up trouble in Yucaipa, California – but it turns out they messed with the wrong town. Video shows citizens turning out in large numbers to chase the thugs out of town.

“They just beat the ever-loving snot out of three or four guys,” said an unidentified man who was filming the beat down. “The Antifa guys are not doing well at all here. They’re getting the **** kicked out of them.”

At least one of the Antifa thugs lost his shirt and one of his shoes as he was chased around a parking lot.

“You can’t come to Yucapia with this ***,” the videographer said.

The Antifa thugs finally got the message and scampered off – but not before a local resident offered a helping hand.

When Antifa messes with the suburbs. Best thing I’ve ever seen. pic.twitter.com/zK6MkhdemV

Here in my hometown of Yucaipa Ca we deal with our own! Armed and posted protecting our city. Antifa was ran out of town as quickly as they came in. pic.twitter.com/xjNHLyTC19