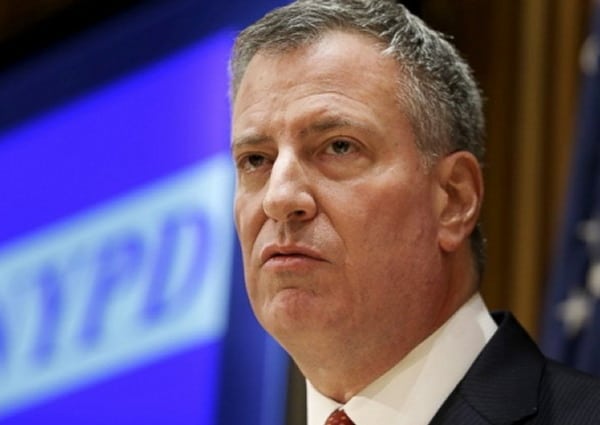 Crimes and murder in the city are out of control, millions of people are still out of work, businesses have been destroyed by rioters, and de Blasio is devoting as many as 27 of the city’s remaining police officers to guarding the Black Lives Matter mural in front of Trump Tower.

That’s what he cares about. A political mural painted on the street.

You’ve really got to hand it to New York Mayor Bill de Blasio. As violent crime goes out of control in the Big Apple, de Blasio, or as radio talk show host Mark Levin calls him, “de Commie-o,” at least has his “priorities” straight.

He has directed that 27 police officers daily be assigned to protect the Black Lives Matter “mural” outside of Trump Tower.

If there was a competition for the worst mayor in the United States, it would be a tough competition. You have Chicago Mayor Lori Lightfoot, who ordered Chicagoans to stay at home during the height of the coronavirus pandemic, then was seen out getting her hair cut…

It is an interesting dichotomy actually. De Blasio seems more interested in protecting the so-called “brand” of Black Lives Matter than actual black lives themselves. Otherwise, the 27 officers dedicated daily to protecting a bit of street paint would be directed toward actually protecting black lives, many of which have been lost with the latest spike in murders.

Why are the people of New York putting up with this?

Just heard that @NYCMayor has 1 & 8 securing the #BlackMindsMatter mural at Trump Tower. That’s one sergeant and eight cops, x 3 tours a day! Violence, shootings, and murder is up in NYC and this clown has three sergeants and 24 cops guarding a mural! If true, #SICKENING

It’s true. I was just there and spoke to the cops, they say they are getting paid to baby sit paint, and not happy about [email protected]

Has New York City had a worse mayor in recent history?