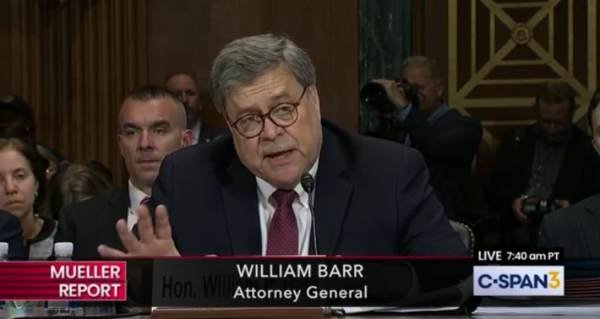 Written Statement of Willi… by Jim Hoft on Scribd

Police forces today are far more diverse than ever before; there are both more black police chiefs and more blackofficers in the ranks. Although the death of George Floyd – an unarmed black man – at the hands of the police was a shocking event, the fact is that such events are fortunately quite rare. According to statistics compiled by the Washington Post, the number of unarmed black men killed by police so far this year is 8. The number of unarmed white men killed by police over the same time period is 11. Some unarmed suspects, moreover, were physically attacking officers or threatening othersat the time they were shot. And the overall number of police shootings has been decreasing. Nevertheless, every instance of excessive force is unacceptable and must be addressed, as is happening now in Minneapolis.

And finally AG Barr lectured Congress on siding with the rioters and looters.

Remarkably, the response from many in the media and local elected offices to this organized assault has been to blame the federal government. To state what should be obvious, peaceful protesters do not throw explosives into federal courthouses, tear down plywood with crowbars, or launch fecal matter at federal officers. Such acts are in fact federal crimes under statutes enacted by this Congress.

As elected officials of the federal government, every Member of this Committee – regardless of your political views or your feelings about the Trump Administration – should condemn violence against federal officers and destruction of federal property. So should state and local leaders who have a responsibility to keep their communities safe. To tacitly condone destruction and anarchy is to abandon the basic rule-of-law principles that should unite us even in a politically divisive time. At the very least, we should all be able to agree that there is no place in this country for armed mobs that seek to establish autonomous zones beyond government control, or tear down statues and monuments that law-abiding communities chose to erect, or to destroy the property and livelihoods of innocent