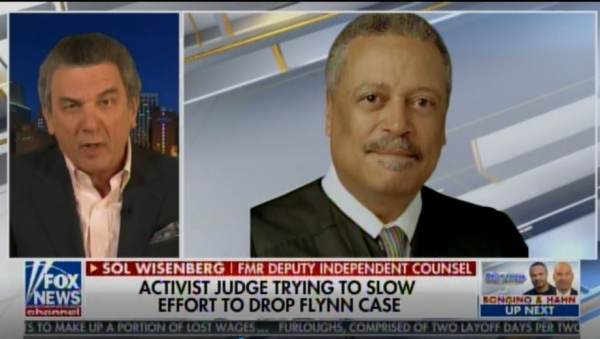 ttorney Sol Wisenberg shared with Laura Ingraham on the Ingraham Angle tonight that the actions of Judge Sullivan go against the results of a recent case on the matter in the DC Circuit.  If the DOJ or government wants to dismiss a case they proposed, a judge cannot refuse the government’s right to do so.

The judge overseeing the General Flynn case, Judge Sullivan, has shown his disdain for the rule of law.  He accused General Flynn of treason during one court hearing. He is clearly a Deep State hack.  Now he wants to bring another judge into the case to determine if it is right for the DOJ to dismiss the case against Flynn.

Sullivan’s court is rumored to also want to indict Flynn for lying to the court when he pleaded guilty to a crime he didn’t commit after being coerced into it by the Mueller gang.  The Mueller gang threatened to indict the General’s son if he didn’t plead guilty.  The entire disgusting case against Flynn is the most corrupt in our lifetime, yet judge Sullivan won’t let it end.

Under the Fokker Case that just came out 2 years ago, the DC Circuit which governs Judge Sullivan made it very clear if the government wants to dismiss a case you cannot, the District Court cannot refuse to do so because he doesn’t like the government’s theory. Because he thinks the government should continue the case.  And it doesn’t matter if the defendant has pled or not.

Via The Ingraham Angle

The Fokker case referred to by Weisenberg is discussed in the Harvard Law Review:

Since the Arthur Andersen prosecution in which thousands of innocent workers lost their jobs, the Department of Justice (DOJ) has increasingly turned to deferred prosecution agreements (DPAs) to avoid the collateral consequences of a corporate criminal conviction.1.SeeBrandon L. Garrett, Too Big to Jail: How Prosecutors Compromise with Corporations 41, 44, 55 (2014). In a DPA, the government agrees to dismiss filed charges if a corporation complies with negotiated conditions that are aimed at punishing the misconduct and allowing the corporation to demonstrate rehabilitation. Traditionally, judicial scrutiny over the DPA’s terms has been “essentially nonexistent.”2. Mike Koehler, Measuring the Impact of Non-Prosecution and Deferred Prosecution Agreements on Foreign CorruptSource: The Gateway Pundit