A week ago on Saturday night protesters torched the Wendy’s restaurant in Atlanta following the death of Rayshard Brooks.

One video that went viral online shows a white girl and ally of Black Lives Matter torching the Wendy’s restaurant in Atlanta. 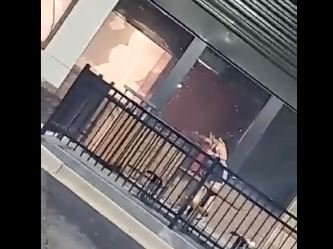 The white girl is seen pouring lighter fluid inside the restaurant.

White girl shown in video footage starting a fire at @Wendys she needs to be found and arrested for arson!!! pic.twitter.com/aTHtsOe4Hu

The Wendy’s restaurant was completely destroyed by the leftist protesters that night.

Officials are try to locate the far left arsonist.

The Atlanta fire officials released photos of Natalie White purchasing supplies before she lit the Wendy’s on fire on Saturday.

Note that she is wearing the same clothing as during her criminal activity.

An arrest warrant has been issued by Atlanta Fire Investigators for Ms. Natalie White. She has been identified as a suspect in the arson fire that burned down the Wendy’s Restaurant (125 University Ave) on Saturday, June 13th. Call 404-577-TIPS or 1-800-282-5804 with any info. pic.twitter.com/Xu6W2hgOi6

During his arrest  Rayshard Brooks mentioned a woman “Natalie White” to police the night he was killed.

Authorities will not tell us whether the two Natalie Whites are the same, or whether Brooks even had someone drop him off at the Wendy’s that night. @FOX5Atlanta

Now authorities are investigating whether the arsonist Natalie White is linked to Rayshard White.