The Republican Jewish Coalition called on Democrat presidential nominee Joe Biden to apologize for comparing President Trump to the notorious Nazi propagandist Joseph Goebbels, with Executive Director Matt Brooks blasting Biden for ‘diminishing the horrors of Goebbels and the Nazis’ with his attack on Trump.

Biden made the comment comparing Trump to Goebbels in an interview on MSNBC with Stephanie Ruhle that aired Saturday in which Ruhle served up a softball question on Trump accusing Biden of socialism. Biden also likened Trump to the communist dictator Fidel Castro.

Ruhle tried hard to suppress a smile as Biden was smearing Trump, but finally gave in and flashed a broad grin. 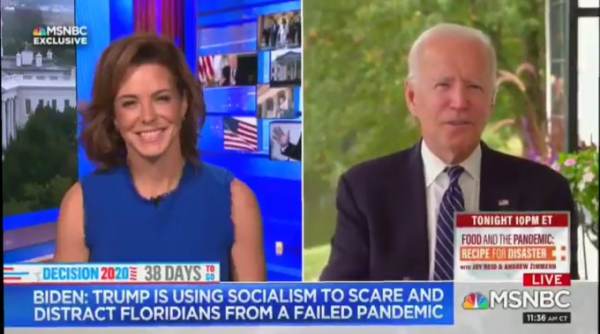 WATCH: In the space of less than a minute, Joe Biden compares Trump to Goebbels and Fidel Castro. pic.twitter.com/nQWqHoQnfM

RJC Calls on Biden to Apologize for “Goebbels” Comment

The rule in debate is that if your only argument is to call your opponent a Nazi, you have no argument at all. Instead of engaging in a debate on policy, Joe Biden has descended to name-calling and Holocaust