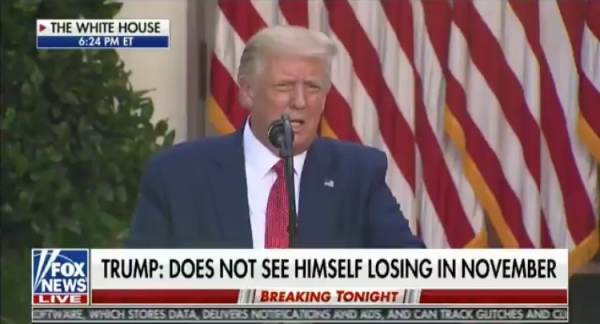 President Trump on Tuesday shredded Joe Biden’s policies at a press conference in the Rose Garden.

“Joe Biden’s entire career has been a gift to the Chinese Communist Party and to the calamity of errors that they’ve made. They made so many errors and it’s been devastating for the American worker,” said Trump.

Trump slammed Joe Biden for supporting China’s entry into the WHO.

“Joe Biden supported China’s entry into the World Trade Organization. One of the greatest geopolitical and economic disasters in world history,” he said.

“Biden personally led the effort to give China permanent, most favored nation status, which is a tremendous advantage for a country to have. Few countries have it. But the United States doesn’t have it. Never did, probably never even asked for it because they didn’t know what they were doing” Trump said. “As Vice President Biden was a leading advocate of the Paris Climate Accord, which was unbelievably expensive to our country. Would have crushed American manufacturers while allowing China to pollute the atmosphere with impunity yet one more gift from Biden to the Chinese Communist Party.”

Trump blasted Biden for being in government for nearly 5 decades and doing NOTHING about our infrastructure.

“So Biden was here for 47 years. Eight years, the last eight years, not long ago as Vice President he said, “One in five miles of our highways are still in poor condition.” Well, we’re doing a good job on highways, but why didn’t he fix them three years ago? Why didn’t he fix them?” Trump said, adding, “He was here for eight years with President Obama. Why didn’t they fix them? Tens of thousands of bridges. This is what he wrote. High speed broadband. We want high speed… well, why didn’t they get it?”

The President hit Biden again on his foreign policy failures.

“He never did anything except make very bad decisions, especially on foreign policy. So Joe Biden and President Obama freely allowed China to pillage our factories, plunder our communities and steal our most precious secrets. And I’ve stopped it, largely.”

Trump hit Biden on amnesty for illegals, warned he would eliminate school choice programs and said he supports the radical left’s agenda to cut police funding.