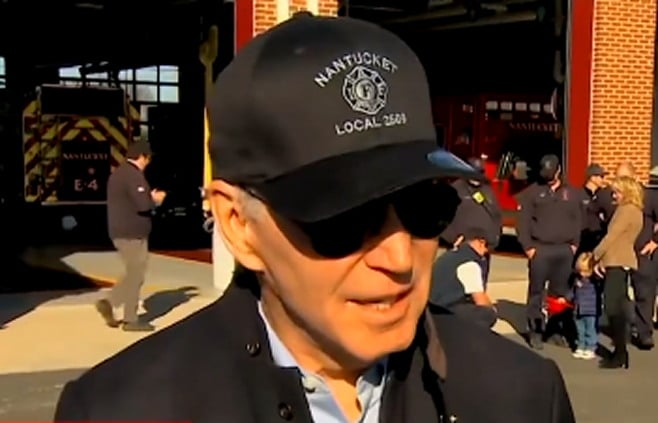 While Joe Biden was enjoying Thanksgiving on Nantucket this week, he made some incredibly ignorant comments about guns to a reporter.

These comments prove that he has no real understanding of guns or the Second Amendment.

He is hardly a person who should be forming any related policy.

Among the myriad of issues about which Joe Biden makes a complete fool out of himself every time he opens his mumbling mouth, gun control (AKA: “common sense” gun laws) ranks number one in my book.

As my colleague Nick Arama reported on Thursday, Biden once again lost what little mind he has left as he absurdly tried to build a case for banning the one firearm that lives rent-free, 24/7, in the tormented heads of gun grabbers, everywhere, the evil “weapon of war”: the made-up “assault rifle.”

While mumbling about the recent mass shooting at a Colorado LGBT club by a suspect we later learned self-identified as “non-binary,” which totally blew the left’s “right-wing” narrative out of the water, Biden said:

The idea we still allow semi-automatic weapons to be purchased is sick. Just sick. It has no socially redeeming value. Zero. None. Not a single solitary rationale for it except profit for the gun manufacturers.

“The idea we still allow semiautomatic weapons to be purchased is sick,” President Joe Biden said as he eyes an assault weapon ban. pic.twitter.com/8ntsqyTBE5

Did you catch that wording?

Wow! “Allow”? There’s this thing called the 2A, which makes it a right for me to own my Glock. Let him try to repeal if he thinks he can.

You’re not allowing anything. It’s a Right.

Furthermore, Biden is describing most guns.

Biden now calling for a ban on all semiautomatic weapons. That’s most modern guns. pic.twitter.com/bVozVk3EbZ

Biden has no business even discussing this issue.