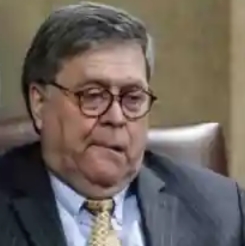 FBI Director Christopher Wray and former Attorney General Bill Barr knew about the Hunter laptop before Donald Trump was impeached. They knew, and we knew they knew. The FBI had the laptop in 2019.

FBI Director Christopher Wray, who has helped transmogrify the agency, won’t answer questions from congressmen and rushes off to a vacation instead. Barr goes from interview to interview, saying Donald Trump is dangerous. From here, it looks like they are the dangerous ones.

As Rudy Giuliani said last December, they are guilty of “major disloyalty to our country.”

Last April, Jesse Watters grilled Bill Barr about the Hunter laptop. In Bill Barr’s own words, we later discovered that he knew about the laptop before Donald Trump’s impeachment.

“Did you just hear the conversation about the laptop from hell?” Watters asked.

“When this was all going down in the fall, did you see what the left was doing with this disinformation campaign?” Watters continued. “Did you come out and say anything about that?”

“Absolutely,” he said. “As soon as this letter came out from these so-called intelligence specialists, the DNI, John Ratcliffe at the time, and the FBI, which worked for me, both came out and said this was not the result of disinformation, Russian disinformation. The media ignored that completely. Just kept on going with the disinformation line.”

“That’s pretty egregious,” Watters said. “Would you say that there was a conspiracy between Big Tech, former intelligence officials, the media, the Democrats to, I don’t know, let’s just use the word ‘rig’ an election?”

“Yes,” he responded. “That definitely made an impact on the election, suppressing that news. And it’s not a question of whether it was criminal or not. Just the facts alone were shameful, and most Americans would immediately see what was going on and how repulsive it was, and it would have had an effect. The issue of criminality is a different issue.”

Behind closed doors, however, Barr was ripping Trump for turning the Hunter Biden laptop into a campaign issue, according to his own book’s account. He also wasn’t investigating the election while saying he did.

He was saying something quite different at the time to Donald Trump. At least, that’s what Bill Barr says in his book.

“You know this stuff from Hunter Biden’s laptop?” Trump asked him, according to Barr.

“Mr. President, I can’t talk about that, and I am not going to,” Barr said he ‘sharply’ replied.

Barr said DJT didn’t like his tone of voice.

“You know, if that was one of my kids– ” Trump objected, according to the book.

“Dammit, Mr. President, I am not going to talk to you about Hunter Biden. Period!” Barr roared.

We now know why. He, too, was part of the coverup. Watch:

The cover-up – that far exceeds anything that went on in Watergate – involved so many people. None of them are apologizing, and none will be held to account. They are all corrupt.

It’s treachery by so many and none are apologetic.

“A source is telling Watters’ World that Attorney General Bill Barr was just given a trove of smoking-gun documents that could point directly at former Pres. Barack Obama, revealing his powerful connection to #Spygate and the #RussiaHoax.” https://t.co/vob9qp9oFF

In August 2022, Rudy made a great point about what Hunter Biden was involved in that the media and our intelligence community ignore. There were three Hunter laptops, and the FBI had at least two of them. We know what was on one of them, and it’s devastating to the Biden family.

Millions of Americans said they would not have voted for Joe Biden had they known about the Hunter laptop.

The laptop showed Biden was deeply involved in the Ukraine affair up to his ears, and everything Trump said was true. The impeachment was not necessary. They had exculpatory evidence.

John Solomon and Peter Schweitzer uncovered a number of times that references were made to their comingled finances.

Over and over, Hunter and Joe are tied into sketchy, compromising business deals together.

Our government thought it better to install a crime family in the White House rather than let a Republican they disliked win the election. That is the very definition of treachery.

Earlier today, the decision came down to fine the Trump Organization $1.6 million and imprisoned the former CFO for six months over a petty white-collar crime. They still don’t have a thing on Donald Trump despite the phony impeachments.

Rudy Guiliani said last August that the Bidens are a crime family and “if I accepted all that, the Mafia would still be in New York.”

“They’ve been going through his life for seven years, and they can’t come up with anything that you can even articulate on that. This records act is not a crime. You’re going to have to go through all kinds of contortions to make it a crime. Meanwhile, the other guy is involved in child pornography…he’s involved in illegal possession of a gun…he’s involved in lying to get a gun…he’s involved in money laundering…racketeering. He’s taken money from some of the most crooked people in the world and some of the most evil governments. And in his own words, he tells you I gave 50 percent to my father for thirty years.”

When you put it that way? 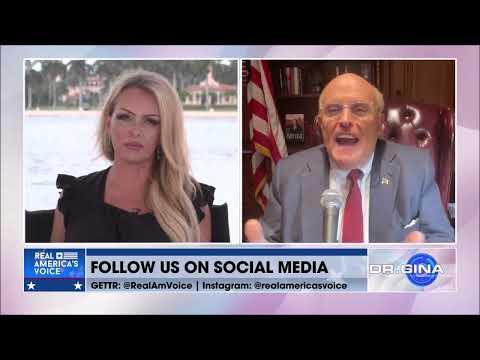 Wray and Barr Knew About the Laptop Before Trump was ImpeachedDecember 3, 2022In “Home of News, Politics & Opinion”

Rudy hits the bullseye all the time.

Barr is the most unethical, and the biggest criminal, in US history, considering the multiple obstructions of justice and other oath violations he committed, as the 2020 coup was planned. He had a solemn duty to expose the laptop and press charges. He often speaks as an observer rather than a participant.

Barr engages in cheap MSM attacks against Trump while the nation burns. We are being invaded with millions of people a year, and he never mentions is. His behavior is beyond suspicious. The USA has had a coup, and he was a key part of it. That coup was impossible without the assistance of the DOJ and military.

“It’s treachery by so many and none are apologetic.”

I’ve begun to wonder if, in a twisted sort of way, this is not turning out to be a good thing for us. For far too long the majority of Americans have been too content in their complacent stupor … blindly trusting. How else can the malevolent Left have pulled off their takeover and destruction of nearly *e*v*e*r*y*t*h*i*n*g* that once held this country together? … and made her strong?

The Deep State (Left and Right) has taken advantage of our lack of mental discipline, our intellectual laziness. But in their heedless glee, they are overplaying their hand.

Many of us now wouldn’t dream of taking anything ANY of them say at face value. We listen with deep askance to every word that comes out of their mouths, and then head off to research sources we trust, to dig through the annals of history, determined to uncover the truth. Could it be this is beginning to develop a renewed veneration for independence, which has long gone missing among us?

If so, I’m thinking this is a good thing. A powerful thing.

As for their apologies, they can keep them. Justice is what we seek.