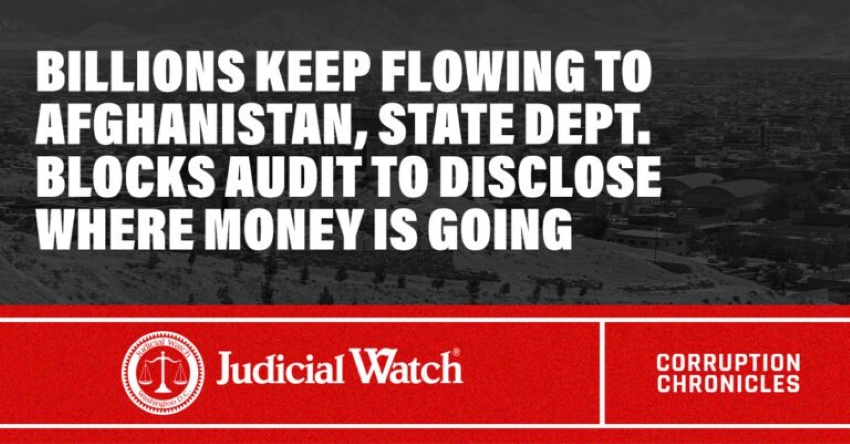 The U.S. has dropped a ghastly $146 billion on Afghanistan reconstruction in the last two decades and billions more continue to be spent, but the Biden administration is blocking federal auditors from conducting their congressionally mandated job of investigating where the money is going. For months the Special Inspector General for Afghanistan Reconstruction (SIGAR) has been trying to investigate the abrupt collapse of the U.S.-backed government in Afghanistan, if the State Department is complying with laws and regulations prohibiting the transfer of funds to the Taliban and ongoing humanitarian programs supporting the Afghan people. However, the State Department and its offshoot, the United States Agency for International Development (USAID), refuse to cooperate as required by law.

This month the head of SIGAR, John F. Sopko, expressed outrage at the State Department’s efforts to obstruct his office’s investigation. In letters to congressional committees and Secretary of State Antony Blinken and USAID Administrator Samantha Power, Sopko reveals that the State Department has blown off more than 20 requests for information from his office in the last eight months. The watchdog writes that the sudden refusal to cooperate is particularly surprising after more than a decade of cooperation. “Billions of dollars have been spent in Afghanistan and billions more continue to be spent,” Sopko writes. “Congress and American taxpayers deserve to know why the Afghan government collapsed after all that assistance, where the money went, and how taxpayer money is now being spent in Afghanistan.”

The State Department recently informed SIGAR, which was created by Congress to provide independent and objective oversight of Afghanistan reconstruction projects and activities, that it would not cooperate with future financial audits. Instead, Sopko writes, the State Department told him from now on it would choose its own auditors. The watchdog reminds the State Department that it is prohibited by law from preventing his office from carrying out its duties and that its authorizing statutes specifically states no officer from the Department of Defense, the Department of State, or the United States Agency for International Development shall prevent or prohibit the Inspector General from initiating, carrying out, or completing any audit or investigation related to amounts appropriated or otherwise made available for the reconstruction of Afghanistan. “It should go without saying, but neither SIGAR’s authorizing statute nor the Inspector General Act of 1978 contain a “choose your own auditor” provision,” Sopko writes to Blinken.

Of greatest concern to the Afghanistan watchdog is the State Department’s refusal to provide basic information for an audit involving efforts to ensure that ongoing programs supporting the people of Afghanistan do not result in the illegal transfer of U.S. taxpayer funds to the Taliban or the Haqqani Network. “The fact that State and USAID would obstruct such oversight work, particularly after the Taliban’s seizure of governmental power in Afghanistan, is unprecedented,” Sopko writes. “Given the express prohibition against State and USAID officials preventing SIGAR from conducting its oversight work, it is also illegal.” The SIGAR concludes by writing that, as the U.S. government continues adding to the billions of dollars that it has already spent in Afghanistan since 2002, U.S. taxpayers deserve objective information concerning where their money is going and to whom it is being given.

The letters to the Secretary of State, USAID administrator and federal lawmakers come on the heels of a scathing SIGAR report about the collapse of the Afghan National Defense and Security Forces (ANDSF). The U.S. allocated around $90 billion in security sector assistance to the ANDSF with the goal of developing an independent, self-sustaining force capable of combating threats. Nevertheless, the ANDSF collapsed paving the way for the Taliban to re-establish control of Afghanistan. SIGAR determined that “the single most important factor in the ANDSF’s collapse in August 2021 was the U.S. decision to withdraw military forces and contractors from Afghanistan…”