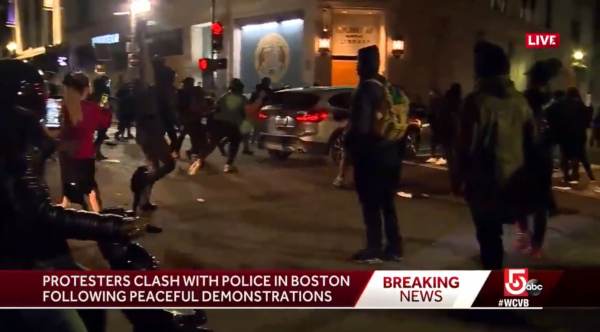 As the protesters turn into rioters in Boston, one motorist wasn’t going to be a victim, as they plowed through the crowd during WCVB’s live broadcast:

During a live report Sunday night on the violence in downtown Boston, an SUV went through a crowd and appeared to hit several people.

The incident occurred on Tremont Street while reporter Peter Eliopoulos was describing the chaotic scene.

Violent confrontations and looting occurred throughout the area after a day of mostly peaceful protests calling for justice in the death of George Floyd, who died in Minneapolis on Memorial Day when a police officer kneeled on his neck during an arrest.

Thugs piled on a police SUV:

Things are getting out of hand in Boston, reportedly the National Guard has been requested.

This may or may not be the same vehicle, on fire:

Live from the Boston protests, a car is on fire and the police are getting violent, one of them shoved me with a bat, please stay safe! pic.twitter.com/UOs4dZGPuA

Video from Sky 5 shows a vehicle burning out of control for well over 15 minutes, as first responders react to violent protesters across downtown Boston. #BostonProtestspic.twitter.com/ePH8lvX0wz

Moments ago: The crowd smashing a Boston Police Department vehicle as violence continues following a day of protests https://bit.ly/2Mjg2n7

Boston police car destroyed and on fire in front of the Beantown Pub. pic.twitter.com/cRFvevDi7c