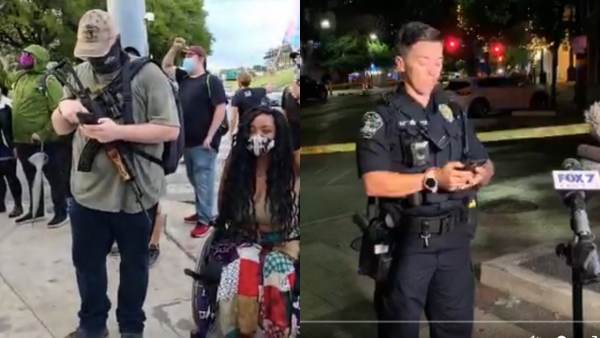 The Austin Police said during a late night press conference that the man who was shot by a motorist during the Black Lives Matter “protest” was carrying a rifle and may have approached the vehicle.

The officer confirmed that there were no other injuries reported and there is no threat to the public.

The incident was captured on Facebook Live. It appeared that the crowd was blocking traffic and possibly surrounding the car prior to the shooting.

“Someone got out of their car and shot one of the protesters,” the livestreamer said.

The man who was livestreaming, Hiram Gilberto, wrote in a follow up Facebook post that “I was no more ten feet from the shooter and running towards his car. It was TOO CLOSE. Currently on my way to give a witness statement to APD. KEEP THOSE AFFECTED IN YOUR THOUGHTS.”

Witness explains what she saw: pic.twitter.com/DfkpqPTFk0

A photo that is making the rounds of the couple described by the witness, “Whitney and Garrett”, shows a person that may be the man who was shot holding a rifle during a protest.

Garrett has a gun. pic.twitter.com/1Dcrt3i9DS

This is a breaking story and the Gateway Pundit will continue to provide updates as they become available.