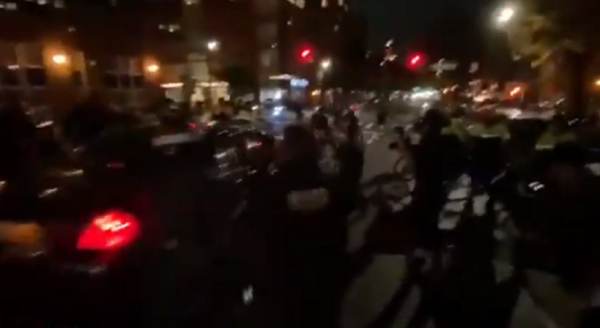 car rammed through a line of NYPD police officers during the Black Lives Matter riot in Brooklyn on Tuesday evening.

The attack on police comes one night after a truck driver in Philadelphia ran over a police officer during the riot there.

BREAKING: Car slams into line of NYPD officers. They are under attack. pic.twitter.com/8Bkfh7HmiL

The violent thugs were out rioting in response to Philadelphia Police fatally shooting a black man who was running at them with a knife on Monday.

Protesters took to the streets of Brooklyn earlier tonite for #WalterWallace. Lots of NYPD & corporate property was redecorated & adorned with radical artwork. Big banks had an especially eventful night. pic.twitter.com/Z1NdZc7v3c

The condition of the officers who were struck has not been announced at time of publishing.

In Philadelphia, there has been looting, arson, and violence against police for two nights straight. A black truck ran over a female police officer during the riot there on Monday evening.

The riots are ongoing and Gateway Pundit will be continuing to provide updates as the situations in both cities unfold.