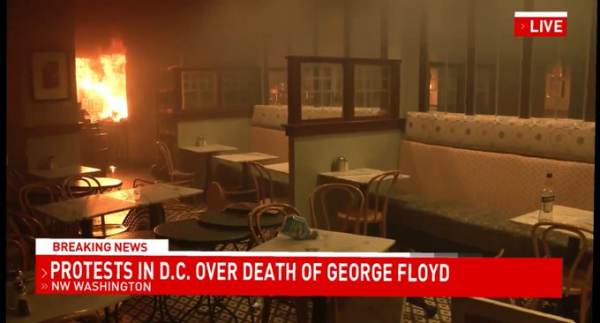 Multiple fires have broken out near the White House in Washington, D.C. kate Saturday night. A car was set on fore earlier. Later a large building fire was burning near the Hay Adams hotel a block north of the White House. Around the corner two restaurants were set on fire. A passerby told WJLA TV that he grabbed a fire extinguisher and put out the fire at the Oval Room restaurant.

A few minutes earlier the WJLA reporter was reporting on the Tea House restaurant being broken into when he saw a fire growing in a back room.

A D.C. fireman told the WJLA reporter the fire was mainly construction scaffolding and did not spread to the Hay Adams or other nearby buildings.

This story will be updated.

Box Alarm 800 block of 16th St NW. #DCsBravest are extinguishing a fire primarily involving multi story scaffolding in an alley adjacent to the Hay Adams Hotel. There is no fire extension into the hotel. pic.twitter.com/lAhQRdp7sn

Along Eye street between 16th and 17th cars have been set ablaze, trees are burning and the BB&T has been graffitied with 666. #DCProtestspic.twitter.com/pSoQUgv8CS

The latest in downtown DC: Cops had to seize 16th between H and Eye to control the fires. With the authorities tied up there — and still guarding Lafayette — crowds took off west down H, tagging everything in sight and shattering storefronts of restaurants and hotels. #DCProtestspic.twitter.com/vSwnfHOLqR