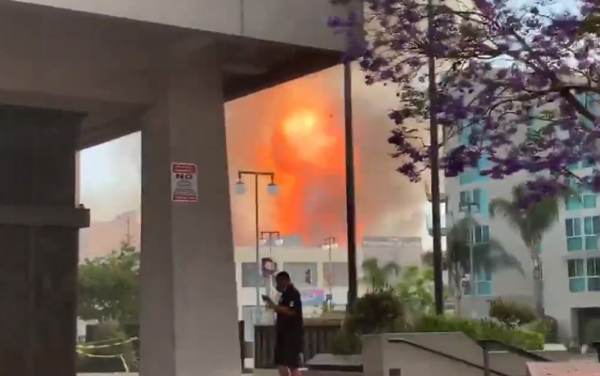 Over 230 firefighters have responded to the blaze and ten have been injured.

The fire department issued a “mayday” call and characterized the incident as a “major emergency.”

The business in the building is called “SmokeTokes Warehouse Distributor” and was making wholesale marijuana oil products using butane.

The same business had another massive fire in 2016.

Sounded like a flyover but no. FIRE! A few blocks away from my loft in #DTLApic.twitter.com/LOUT21pMAW

KTLA reports that the blast occurred at approximately 6:30 pm while firefighters were responding to a fire at a one-story structure at 327 E. Boyd St., according to LAFD.

First responders saw the towering explosion at 327 E. Boyd St which rumbled throughout the block, charring a tall fire ladder, blackening a fire engine across the street, and damaging other equipment, per Scott

Firefighters were seen coming out with “obvious damage and burns.” pic.twitter.com/p7oYh1pPuD

“We’re always worried about a secondary explosion, we don’t know what caused the first one and we’re trying to avoid this incident becoming even worse if the second one does happen,” Prange told KTLA.

There was just and explosion of some sort in downtown #LosAngelespic.twitter.com/7YgX62nFeY

“My thoughts are with our brave @LAFD firefighters,” Los Angeles Mayor Eric Garcetti tweeted. “Closely tracking this situation as we continue to get more information.”

My thoughts are with our brave @LAFD firefighters. Closely tracking this situation as we continue to get more information. https://t.co/uT63AdvHGl

This is breaking news and we will update this report as more informationSource: The Gateway Pundit