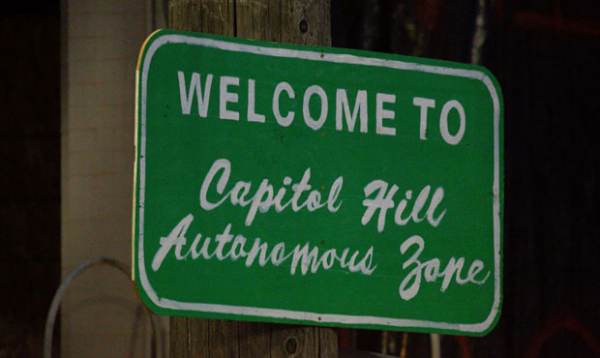 Multiple shootings have been reported in the lawless “CHAZ” area of Seattle just days after two people were shot there, one of them fatal.

A man who was filming had his phone taken by one of the CHAZ “protesters” who was demanding that he delete his footage. The idiot thief did not realize that it was livestreaming and continued to film from the stolen phone, also broadcasting his face.

From the sound of the livestream footage coming from the scene, there may be multiple people shot, as the CHAZ inhabitants were calling for medics. At least one person is in serious condition, according to a spokesperson from Harborview Medical Center’s Emergency Department.

Watch last 20 mins of this Twitch stream which caught it

Then a guy comes up and steals the streamer’s phone https://t.co/s58g6p9wMK

Ironically, the Seattle Protest Network seemed to complain about the lack of police response to the violence.

11:53PM – We’re hearing fireworks now in the area of the CHOP ZONE. Over an hour after multiple shooting incidents, there has been no police response in the area. No visible presence from @SeattlePD at all.

Following Saturday’s shooting in the zone, the Seattle Police Department was prevented from being able to reach the victim due to the “protesters.” They also shared of video of what happened when they went there.

Police Officers Guild President Michael Solan blasted Seattle’s leadership on Saturday for enabling the conditions that are making it unsafe for police officers to do their job in the city.

“Early this morning, that violence was raw and real where one of our community members lost their life, and police are still not allowed into that area and were prevented to providing that police service to the area to locate victims and/or render aid. [It’s] very troubling what’s going on,” Solan said on Fox News.

“And again, we’re left wondering, what’s next?” he asked. “And, now our elected officials have removed our ability to have less lethal chemical munitions that are effective for us to disburse unruly, violent crowds to protect those police facilities, let alone ourselves.”