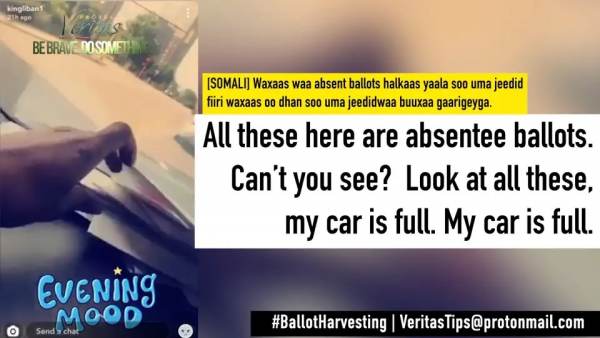 The latest video exposé from Project Veritas reveals a ballot harvesting scheme involving political allies and associates of Rep. Ilhan Omar,” according to the organization.

In undercover footage released on Sunday, the investigative journalists at Project Veritas found that Omar’s campaign manager Ali Isse Gainey is a key player in the ballot harvesting scheme.

The footage shows a man named Liban Mohamed saying that he was collecting the ballots to help his brother win the city’s Aug. 11 special election for a vacant Ward 6 city council race—which was held the same day as the primary for Omar’s MN-05 congressional seat.

“Money is the king in everything”; harvester boasts harvesting HUNDREDS of 2020 absentee ballots ILLEGALLY! “Numbers do not lie…these here are all absentee ballots…my car is full…”#BallotHarvestingpic.twitter.com/cB2Bz31mSY

“Numbers don’t lie. Numbers don’t lie. You can see my car is full. All these here are absentees’ ballots. Can’t you see? Look at all these, my car is full. All these are for Jamal Osman… We got 300 today for Jamal Osman only,” said Liban Mohamed in a series of Snapchat videos posted July 1 and July 2 on his own Snapchat profile.

Mohamed continued on to say that “Money is everything. Money is the king in this world. If you got no money, you should not be here period. You know what I am saying.”

“Ballot harvesting is real and it has become a big business. Our investigation into this ballot harvesting ring demonstrates clearly how these unscrupulous operators exploit the elderly and immigrant communities—and have turned the sacred ballot box into a commodities trading desk,” Project Veritas founder James O’Keefe III said in a statement accompanying the video release.

O’Keefe added, “We are showing Americans what is really going on in one of our great cities—but, it’s not me saying—we have the operators on tape saying it all themselves.”

Omar Jamal, political insider active in the city’s Somali community, had reached out to Project Veritas to expose the scheme.

“It’s an open secret,” he said. “she [Omar] will do anything that she can do to get elected and she has hundreds of people on the streets doing that.”