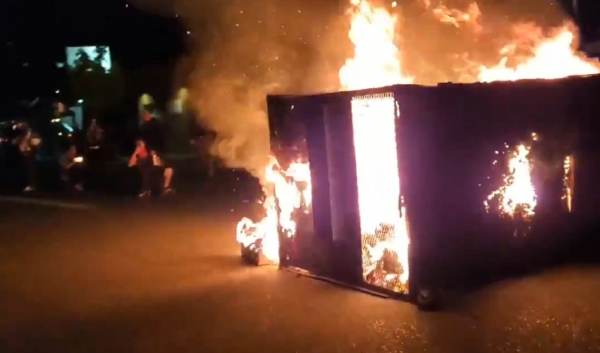 Portland Black Lives Matter rioters were back at the Portland Police Association building and attempting to break in on Wednesday evening.

Rioters smashed through the door last month and started a fire.

Dumpster on fire in the middle of the street. pic.twitter.com/pvitMDPZqt

As people attempted to breach the building, fires were lit outside. A woman who attempted to stop the fires was accused of being a cop and berated by the mob.

Antifa rioters have shut down the street using fencing stolen from elsewhere. They place burning material on the side of the @PortlandPolice building to set it on fire. A woman puts out the flames and is attacked by the mob who accuse her of being a cop. #PortlandRiots

The Portland Police Department tweeted a warning that any “peaceful” protesters in the area should be advised that there is criminal activity taking place and should leave immediately.

They added, “if you are at this location to peacefully protest, know this criminal behavior is occurring and leave the area now.”

If you are at this location to peacefully protest, know this criminal behavior is occurring and leave the area now.

This is an ongoing situation and Gateway Pundit will be updating this story as more information becomes available.