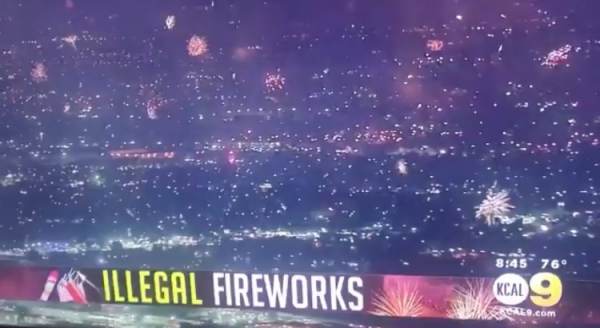 Democrat tyrant Gavin Newsom and other officials shut down 4th of July festivities in California due to a ‘surge in Coronavirus cases.’

Newsom closed down beaches, bars, restaurants and museums, but his winery, Plumpjack Winery in Napa Valley is still open for business.

Californians revolted and celebrated anyway by lighting up the sky with thousands of illegal fireworks.

Aerial footage over Los Angeles was a sight to see.

There were fireworks being launched in every direction!

“No 4th of July. Celebrating America is now illegal.

Californians gave a collective middle finger to Newsom and other anti-American tyrants.

Sky5 got a look at fireworks lighting up the skies for Fourth of July pic.twitter.com/nkFNUh4N8O

Fireworks were launched in Orange County as well.

The civilians Orange County are putting in a more impressive firework display than the cities usually do. pic.twitter.com/4e8WB9iBYj

Residents in San Diego County also launched their own fireworks after July 4 celebrations were cancelled.