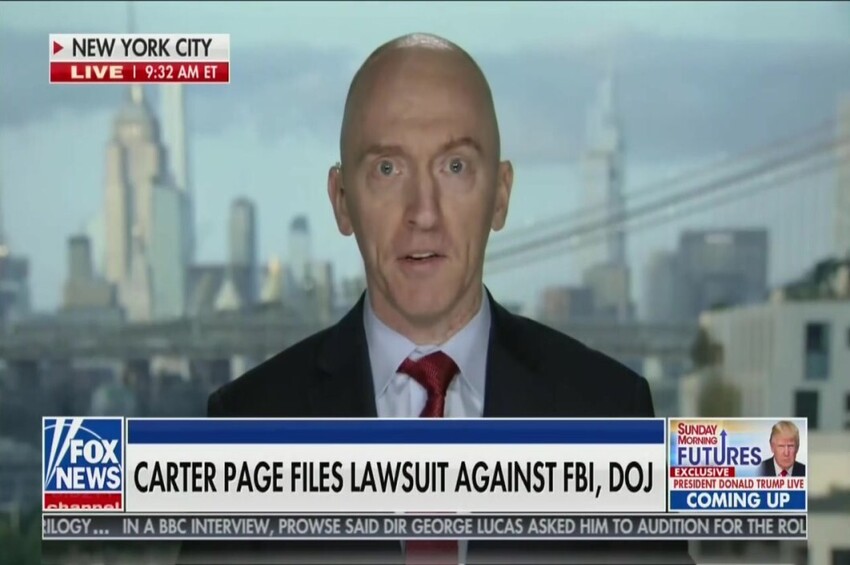 Carter Page said he’s looking for “real justice” after being “framed in an attempted coup against the president.’ His comments came during his first interview since filing a lawsuit against a number of parties involved in improperly approved Foreign Intelligence Surveillance Act applications against him.

“Well, I’m hoping for real justice,” Page told Fox and Friends on Sunday. “It’s been a very long battle over four years since this illegal spying was happening, started during the Obama-Biden administration, and it continued for over a year, and after so many crimes have already been uncovered, by actually an Obama appointee, Mr. Horowitz, last December, this is just a clear, very clear-cut case, that justice needs to be restored.

Page argued that the court should award him “compensatory and special damages” for no less than $75 million.

Both Comey and McCabe have since said they would not have approved the FISA applications if they knew then what they know now.

A report from Department of Justice Inspector General Michael Horowitz in 2019 found at least “17 significant errors and omissions” in the FISA applications related to Page between fall 2016 and spring 2017. Page was never charged with wrongdoing.

As a result of depositions related to the suit, Page said the interviews will “absolutely” reveal new information related to the Russian investigation.

“It is absolutely going to be getting new information and listen,” Page said. “It’s been a long battle … and finally, I think this lawsuit is a way of taking a step in that direction.”

Page echoed comments by members of the Senate Judiciary Committee, including Chairman Lindsey Graham, “about the need for serious reforms” to prevent illegal surveilling against others in the United States.

“I think the commentary by Chairman Graham and so many members of the Senate Judiciary Committee about the need for serious reforms — we really don’t have the full truth yet,” Page said. “And unfortunately, as we were just discussing, it’s going to be a long road ahead, so I think there’s a lot more than needs to be done for sure.”