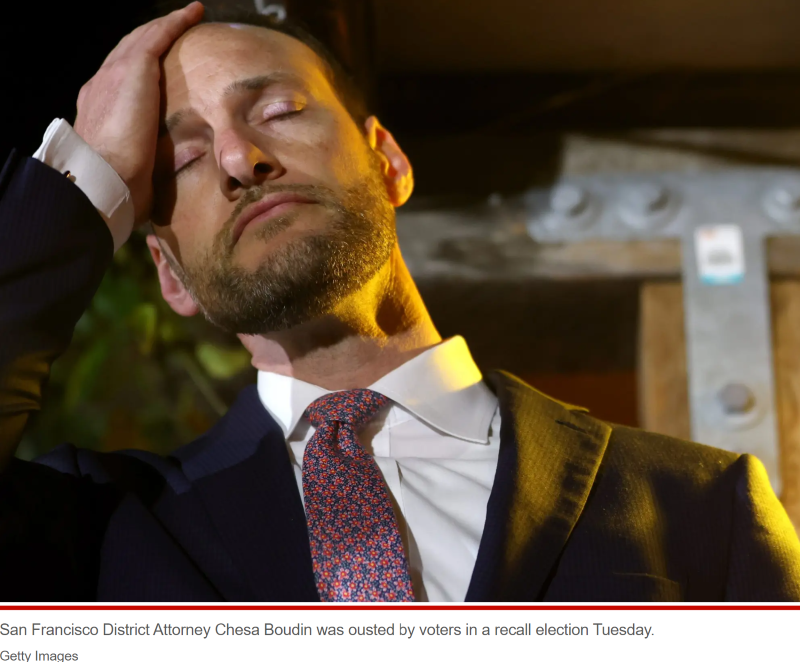 In the time since Chesa Boudin was overwhelmingly voted out as San Francisco’s district attorney last month, Brooke Jenkins has been appointed to take over by Mayor London Breed.

Jenkins has a reputation as a normal, law-and-order-type prosecutor, critical of Boudin’s approach of going soft on violent and career criminals. According to local news reports, she intends to bring back cash bail, restore the possibility of charging under-18 perpetrators as adults, and bring back sentence enhancements for gang-related crimes.

Jenkins’s appointment reflects the demonstrated desire of San Franciscans — yes, even them — for law and order. But leftists are still out and about, trying to keep themselves relevant.

Jenkins’s first meeting with the top prosecutors was tape-recorded by malicious staffers who were holdovers from the Boudin days.

They also leaked a second story to SFGate filled with tedious details and whining about how things are going in the office. They whined that Jenkins took six days (Boudin apparently took five) to send out an officewide introductory email after taking the job, which of course makes her history’s worst monster.

Well, the other shoe finally dropped on Friday. Jenkins has finally gone and fired 15 of the 25 senior staff who had worked under Boudin.

If you’ve been following this story, then your only question is why Jenkins didn’t fire every single one of them, fumigate the building, and start over.

But the article at the link might provide a window into San Francisco journalism and how it fuels the work of self-important but extreme, far-left activists whose ideas are not reflective of public opinion — not even in San Francisco. In fact, you’ve probably noticed this in your own hometown liberal rag.

After announcing the firings, the article becomes a lengthy forum for the fired staffers, plus other critics of Jenkins, to shoot barbs at her, both in real life and through their Twitter accounts.

Now, it’s one thing to get their reactions, but just think about this for one second: A majority of San Francisco voters just voted down these people’s idiotic vision of criminal justice reform, the kind that’s soft on violent and career criminals — yet a reporter at SFGate cannot find one single person to quote who will say something positive about the firings.

“Hell, yeah, maybe now they’ll finally start doing their jobs and putting some criminals in jail!” or, “If they worked for Boudin, they must not be very bright anyway,” or, “We used to have a beautiful and relatively safe city — maybe now we can go back to that. ”

Again, this is the majority opinion in that city.

Why do journalists at so many major newspapers feel like they have to do this — to give the far Left a direct pipeline and turn their newspapers into mouthpieces for them?

Anyway, it warms my heart that all these progressives are so upset and continue to believe themselves relevant even after losing an election in what is arguably the most or second-most progressive city in America. How typical that they already want to overturn the result of that vote and go back to ruining their city.

And if they could, they’d like to ruin your city, too! This is how modern, urban progressivism works.