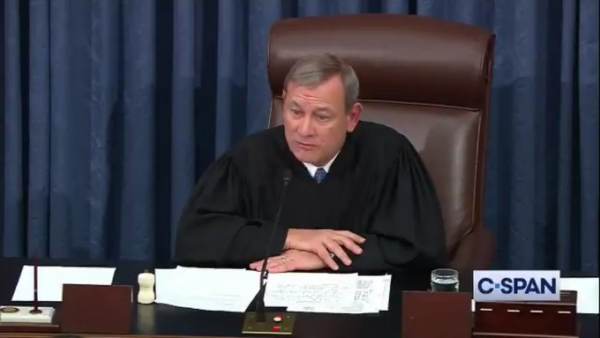 The Supreme Court belatedly disclosed Tuesday night that Chief Justice John Roberts, 65, fell and was hospitalized overnight last month. A seizure was ruled out by doctors with the fall being blamed on dehydration and Roberts’ injury to his forehead from the fall needing sutures, according to a Supreme Court spokeswoman. Roberts fell from a seizure in 2007 and had a seizure in 1993, according to reports.

“The Chief Justice was treated at a local hospital on June 21 for an injury to his forehead sustained in a fall while walking for exercise near his home,” said Kathy Arberg, public information officer for the Supreme Court. The fall happened at the Chevy Chase Club, according to a source familiar with the matter.

“The injury required sutures, and out of an abundance of caution, he stayed in the hospital overnight and was discharged the next morning. His doctors ruled out a seizure. They believe the fall was likely due to light-headedness caused by dehydration.”

The Washington Post was first to report that Roberts had gone to the hospital. Roberts was taken to Suburban Hospital, a source with direct knowledge told CNN…When asked why the public had not been told of the incident earlier, Arberg told CNN, “The injury was not significant; he stayed overnight out of an abundance of caution and went home first thing in the morning.”

The Washington Post broke the story of Roberts’ hospitalization.

Heckuva scoop by ⁦@scotusreporter⁩: “Roberts did not publicly disclose the matter, and the court’s confirmation came in response to an inquiry from The Washington Post, which received a tip.” https://t.co/7O0ehZzAj1

Roberts was nominated by President Bush in 2005. He has been a cause of frustration among conservatives with his liberal-favoring swing vote rulings saving Obamacare and most recently saving Obama’s DACA edict for illegal aliens.

The Court has also held back timely release on the health travails of Justice Ruth Bader Ginsburg, often not informing the public about her hospitalizations until after the fact.