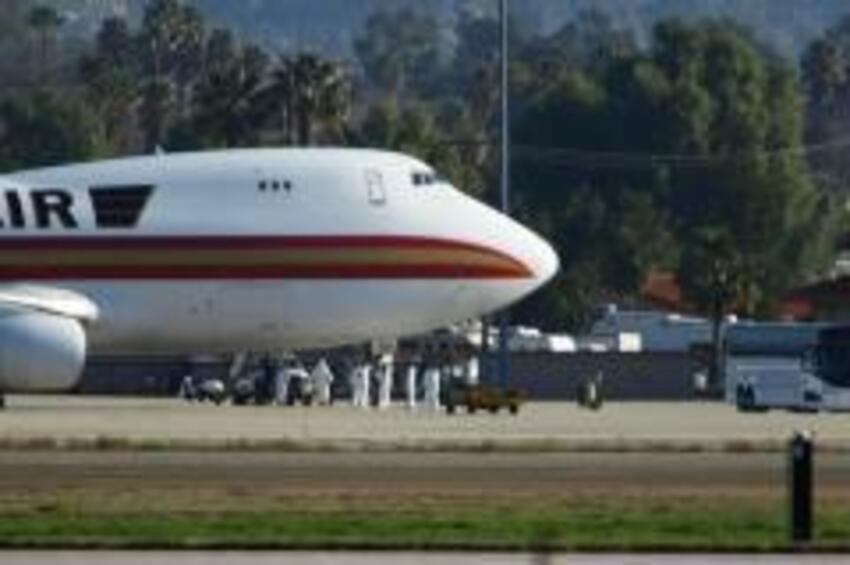 Health personnel in biological hazard suits wait for Americans evacuated from Wuhan, China to disembark, at March Air Reserve Base in California on Wednesday. (Photo by Matt Hartman/AFP via Getty Images)

(CNSNews.com) – The number of confirmed cases of the China-originated novel coronavirus is approaching 8,000, and by Thursday morning local time the number of deaths had climbed to 170.

A Republican senator is urging the administration to enforce a targeted travel ban “until this crisis is under control.”

According to data compiled by the Center for Systems Science and Engineering at Johns Hopkins University, all 170 of the reported deaths are in mainland China, with 162 of them in Hubei province where the outbreak originated in the city of Wuhan.

Of the 7,783 confirmed cases reported by mid-morning Thursday Beijing-time, 7,678 are in mainland China.

One hundred and five confirmed cases have also been recorded elsewhere, most across the East Asian region but some as far from the outbreak epicenter as the United States, France, Germany, the UAE, and Canada.

The U.S. Centers for Disease Control and Prevention is reporting five confirmed cases in the United States, with another 92 potential cases pending – that is, specimens have been received and are awaiting testing, or specimens are en route to CDC.

State Department spokeswoman Morgan Ortagus said the travelers would continue to be monitored by CDC and Health and Human Services (HHS) experts.

“All appropriate steps are being taken to safeguard the health of these returning Americans, as well as the health and safety of their fellow Americans here at home.”

The chartered Boeing 747, carrying 210 Americans, landed at March Air Reserve Base Riverside, Calif., where according to the CDC those onboard will be housed temporarily while undergoing further screening.

“The passengers have been screened, monitored and evaluated by medical personnel every step of the way, including before takeoff, during the flight, during a refueling in Anchorage, Alaska, and now post-arrival,” it said in a statement.

Meanwhile Sen. Tom Cotton (R-Ark.) is calling on the administration to ban all commercial flights from China to the U.S. immediately.

“There’s no need for recreational, student or educational, or non-critical business travel under the circumstances until this crisis is under control,” he said in a letter to Secretary of State Mike Pompeo, HHS Secretary Alex Azar, and Acting Homeland Security Secretary Chad Wolf.

Noting research findings that the coronavirus has a long incubation period, and that people may be carrying the virus without exhibiting symptoms, Cotton said if that is the case, “then the administration’s laudable efforts to screen persons traveling from China could be for naught: no amount of screening will identify a contagious but asymptomatic person afflicted with the coronavirus.”

He also recommended that the administration allow U.S. citizens in China to evacuate under appropriate monitoring; allow critical trade to continue safely, but with strict criteria in place; permit medical personnel and scientists to travel to and from China; and marshal the full resources of the federal government to develop a vaccine.

“America is blessed with world-leading researchers and laboratories on the cutting edge of medical science and epidemiology,” Cotton wrote. “Working in tandem with them, I’m confident our federal research agencies can develop a vaccine in record time.”

Asked while traveling to London Wednesday about calls to stop China-U.S. flights, Pompeo said he did not “want to get ahead of any decisions or talk about internal deliberations.”

Pompeo noted that the State Department has issued “do not travel” advisories in relation to Wuhan, and said the department would continue to “evaluate on a continuous basis, literally hour by hour, whether that’s the appropriate level in Wuhan and whether – we’ve got to get it right in other parts.”

“That includes travel advisories that could encompass a wide range of things, including banning travel,” he added.

“We want to make sure we get it right. At the same time, we don’t want to over-react either. We don’t want to react in a way that actually has the potential to make things worse and not better.”