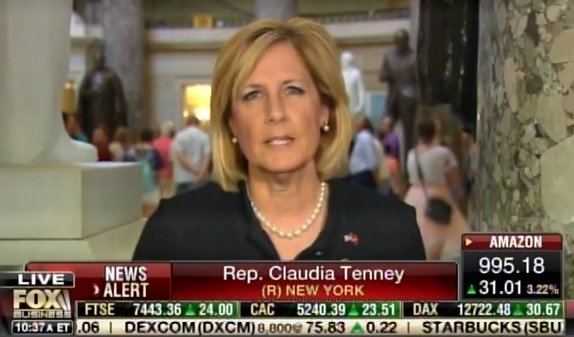 Republican Claudia Tenney announced her victory Friday in the New York-22 district with a 123 vote lead.

Claudia retook her seat where she served before the 2018 election.

Claudia is the 13th pickup for Republicans in the 2020 election.

“Boards of Elections in all eight counties completed their court-ordered canvass yesterday; Republican candidate Claudia Tenney prevailed in that process,” a Tenney spokesperson said. “It’s time for Anthony Brindisi’s Washington operatives to accept the results and stop playing politics with the integrity of our elections.”

Boards of elections in seven of the eight counties that make up the district were ordered by State Supreme Court Justice Scott DelConte to certify election results Tuesday, the station reported.

House Republicans won ALL 27 toss-up races according to the Cook Political Report.

It was a huge year for Republicans thanks to President Donald Trump.

But somehow he lost to a dementia patient?

Republicans won all 27 House races the Cook Political Report rated as “toss-ups” in its 2020 election analysis, in addition to picking up seven of the 36 seats the outlet rated as “likely Democrat” or “lean Democrat.”