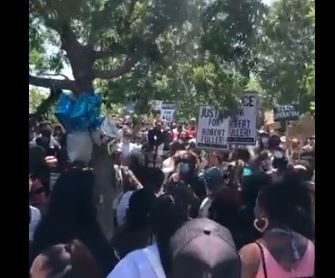 In June 24-year-old Robert Fuller was found hanging from a tree in Palmdale, California.

They held protests against racism in his honor.

People are protesting now and demanding justice for Robert Fuller.

Demonstrators have gathered at the tree where Fuller’s body was found hanging. #JUSTICEFORROBERTFULLER#RIPROBERTFULLERpic.twitter.com/uIRQtswHP4

Crowd protesting outside #Palmdale sheriff department demanding answers regarding the death of #RobertFuller who was found hanging from a tree 2 days ago. @[email protected]@kcalpic.twitter.com/NVPXDnBavw

It was not a lynching.

A police investigation ruled the death of a Black man who was found hanging from a tree in California last month a suicide, officials said Thursday.

Police investigated the death of Robert Fuller, 24, after public pushback upon the initial ruling that his death was a suicide.

Chris Marks, the department commander of the Los Angeles County Sheriff’s Department, said Thursday during a press conference that an investigation found Fuller suffered from mental illness and took his own life early June 10, The Associated Press reported.

Marks noted three hospitalizations since 2017 where Fuller told doctors he was considering suicide. Marks said the most recent was in November when he was being treated at a hospital in Nevada and “disclosed that he did have a plan to kill himself,” according to the newswire.