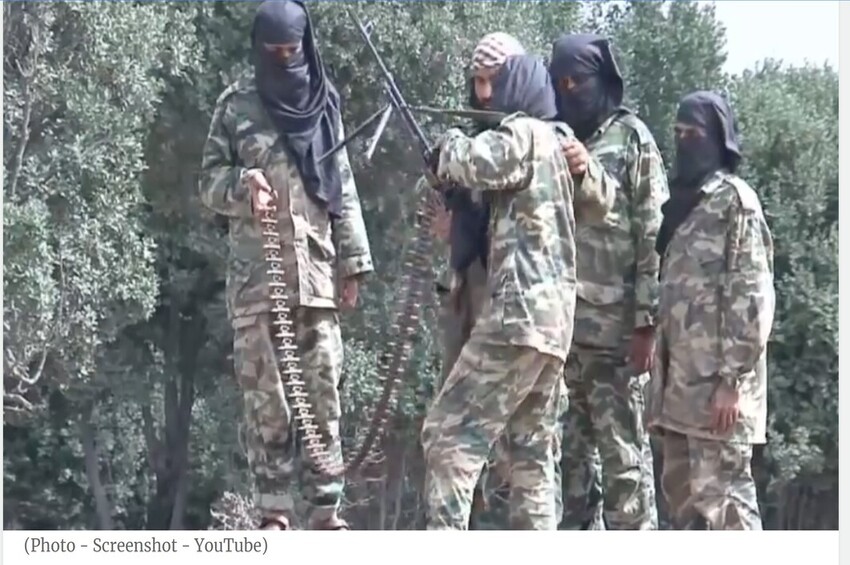 The radicalization of those living stateside has been a relatively small, but persistent problem here in the United States.

The propaganda and disturbing ideology behind groups like ISIS have managed to resonate deeply with certain individuals within our country, as we’ve seen several Americans run off in pursuit of joining the Islamic terror group. A Minneapolis man who ran off to join ISIS is held in a Syrian prison.  (CBS News)

But this time we were able to catch someone before they made their way out of the country to further their radicalization. ABC 6 News reported that A Connecticut man was arrested during the weekend while he was preparing to leave the United States to join the terrorist organization ISIS, according to federal authorities.

Ahmad Khalil Elshazly, 22, from West Haven, was detained on Sunday at the shoreline of Stonington, where he was planning to enter a container ship and embark on a journey to Turkey to fight for ISIS, federal prosecutors said Monday.

Elshazly allegedly paid for ship transport to Turkey because he was concerned about being intercepted at an airport by law enforcement, prosecutors said. He allegedly paid someone $500 to make the journey a reality.

In a statement that was released just this past Monday, Assistant Attorney General for National Security John Demers stated the rationale of the alleged ISIS supporter’s desire to travel by boat over to Turkey:

“Worried that his efforts here would be too small and that he would be stopped at the airport, he planned to travel overseas aboard a container ship to join and fight for ISIS. The National Security Division is committed to identifying and holding accountable those who continue to seek to provide material support to foreign terrorist organizations.”

Back in 2018, Elshaz reportedly had started telling others, both in person and online, that he was planning to travel to Syria and surrounding areas to fight on behalf of ISIS, prosecutors said.

West Haven Man Arrested after Attempting to Travel to Middle East to Join and Fight for ISIS https://t.co/PKxwCIsFMy @FBINewHaven

In February, Elshazly revealed that, according to federal prosecutors, he had saved around $1,000 to use the money to travel to Jordan and then Syria and join ISIS. At a conference in October, Elshazly also expressed a desire to kill 100 “kaffirs,” or infidels.

During the October conference, Elshazly had shouted:

“God willing! May this country burn the same way they burned Muslims! May they burn in fire at the end!”

At that point, he was asked to quiet down his disruptive behavior, to which he replied:

While at that very same meeting, Elshazly also allegedly clamored:

“I want to go to the caliphate and fight there. I can kill maybe … like a hundred kaffir. I can kill them. A hundred kaffirs. If I do something here how many kaffirs could I kill? One, two, three and then I get shot and I die. It is more benefitting if I go there, I could kill more and will get more faithful rewards.”

Apparently, he also sent someone a series of YouTube videos earlier this month, detailing how to use high-powered firearms akin to weapons of war.

Did you know that Law Enforcement Today has a private new home for those who support emergency responders and veterans?  It’s called LET Unity, and it’s where we share the untold stories of those patriotic Americans.  Every penny gets reinvested into giving these heroes a voice.  Check it out today.

Brian Turner, FBI special agent in charge of the New Haven Division, made it clear that the bureau is not going to stop identifying and detaining local radicals:

“It is crucial the citizens of Connecticut, and across the country, know we at the FBI and our task force partners are unwavering in our work to successfully identify and disrupt potential terrorist activities, as this case demonstrates. Through nonstop intelligence gathering and great investigative techniques, we will continue to pursue those who seek to bring harm to U.S. citizens and dismantle potential terrorist actions wherever they may be.”

Elshazly is charged with trying to provide a terrorist organization with material support and, if convicted and sentenced as charged, could face as many as 20 years in prison.

This isn’t the first story we’ve heard about Americans running off to join radical groups like ISIS.

He says he ran away and joined ISIS so that he could live under Islamic law. But now that he’s sick, missing an arm from an air strike and stuck in a prison filled with thousands of other ISIS fighters, this Minneapolis man wants to come back to America.

But here’s the problem. He thinks he should be forgiven for his crimes and shouldn’t have to face jail time if he comes home.

We’re talking about Abdelhamid Al-Madioum, a 22-year-old U.S. citizen who was recruited by ISIS in 2015. CBS News recently interviewed him from a prison in Northern Syria. Prisoners inside the ISIS-filled jail in Syria. (CBS News)

The prison is backed by the United States and is run by a Syrian militia. It’s now home to more than 5,000 prisoners, all suspected ISIS terrorists. CBS says that the guards there have said that notorious extremist leaders as well as bomb makers and other criminal masterminds are among the jail population.

Al-Madioum told CBS in their interview that he had originally been contacted through a message on the social media platform, Twitter. He said that after agreeing to speak with someone within the Islamic State, he was ‘bombarded’ with ISIS propaganda videos, explaining how the cause was benefiting Muslims – not the bloody beheadings we often associate the group with.

The threat of ISIS fighters breaking out of the massive prison camps where they’re being held in Syria and Iraq is growing, according to a new report and a senior U.S. official https://t.co/X8faZAp4GD

Supposedly believing that the ISIS attacks he saw on the news were false – made up to push an agenda – Al-Madioum entered the extremist group’s territory in 2015. He told CBS that his hopes were to become a doctor and help with the cause.

“They gave me a blank check to buy whatever I wanted,” Al-Madioum said.

He, among many others inside the prison, claim that they were never ISIS fighters, but had been swept up in the movement. Al-Madioum said that he lost his arm in a U.S. airstrike.

“I just wanted to live under Islamic law,” he said.

Apparently the Minneapolis native is fed up with living alongside the known terror group and now longs to come back to America.

But here’s the thing… he’s guilty of a number of serious crimes. Al-Madioum has reportedly spoken with officials within the FBI, who have told him that he faces about 15 years behind bars for his traitorous actions.

But Al-Madioum doesn’t think he should have to face any prison time at all, saying the mistreatment and suffering he’s been through over there has been punishment enough.

“Fifteen years is a very long time for mistakes you made coming to Syria,” he said. “The choices that I made in somebody’s eyes are the wrong choices, so I face jail time.”

Al-Madioum told CBS that if his situation doesn’t improve soon, his time might be up.

“I’m going to die soon here,” he said. “I am sick. I do not get any medical attention.”