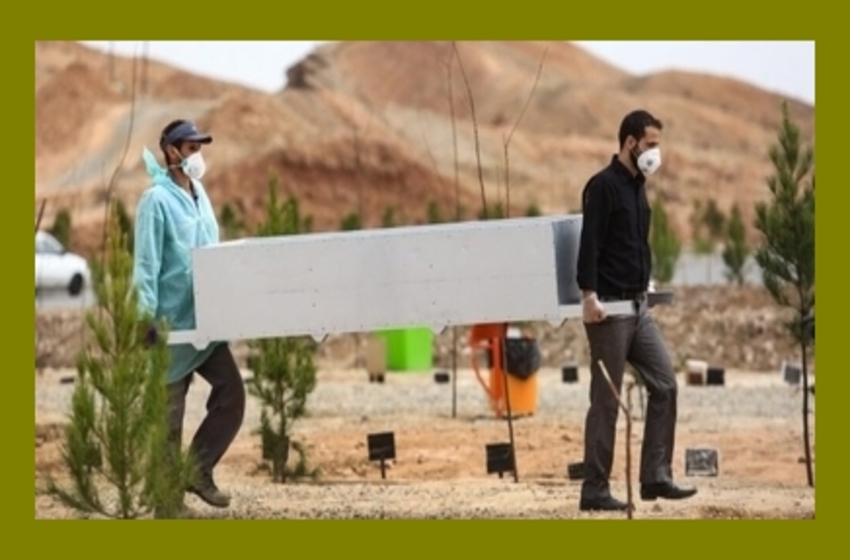 The coronavirus pandemic has hit Iran hard, and not only on the health front. The virus has delivered the latest in a succession of blows to the Iranian regime’s domestic status, fractured economy, and already-low credibility level at home. It also appears to be slowing down its malign activities across the Middle East.

The Iranian regime has, in recent months, absorbed one upper cut after another. The setbacks include a deteriorating economic crisis fueled by U.S. sanctions – a crisis with no clear resolution – the Jan. 3 U.S. drone strike that killed Iranian Quds Force commander Qasem Soleimani, the Ukrainian aircraft downing fiasco that followed soon after, and the growing anti-regime demonstrations driven by an Iranian public demanding a better quality of life.

An ongoing oil war, which has seen prices decrease sharply, also struck a damaging blow to Iran, which still relies on some oil exports to generate income.

Even before the virus hit, leaving an estimated 2,000 Iranians dead and 25,000 infected according to official figures at the time of this writing, the regime had hit its lowest point since the 1979 revolution.

A look at Iran’s consumer price index, and the cost of basic commodities, shows runaway inflation. Protesters demanding a better economic life had, until the pandemic struck, been out in the streets on a regular basis since November, and the fact that the protests reappeared within days of Soleimani’s mass funeral processions indicates that public anger is deeply entrenched.

In its attempt to suppress the unrest, the regime’s security forces killed more than 300 of their own people, wounded 3,500, and imprisoned more than 700 people. Internet access is routinely cut off.

These developments signal massive public disappointment in the Islamic Republic’s leadership, and a domestic challenge that is shaking the Iranian leadership to its core.

At first, Iran responded by stepping up its regional malign activity and its nuclear program activities.

Now, however, while the nuclear program continues to make alarming progress, Iran’s subversive and terrorist activities in the region are decreasing due to the domestic strain.

Earlier this month, an IDF Spokesperson indicated that the military was seeing a reduction in the level of activity by Iran and other adversaries against Israel.

With more than 30 percent of Iranians living below the poverty line, struggling for basic goods before any coronavirus lockdown, while the national economy is in a tailspin, Iran may be unable to fund and organize large-scale regional entrenchment and terrorism activities as aggressively as it could before.

Large scale domestic unrest – the scenario that most frightens the leadership – is unlikely to follow immediately, as the population is practicing social distancing at home. But the shock wave created by the coronavirus and the regime’s mishandling of the crisis could be felt acutely after the pandemic passes, and holds the potential to contribute to the regime’s destabilization.

In recent days, the Iranian military cleared the streets of citizens to enforce isolation.

Recent statements by Khamenei, peddling baseless anti-American conspiracy theories about the virus’s origins, indicate how disconnected the Iranian leadership is from the extreme predicament of its people. Khamenei rejected an American medical assistance program offer.

Khamenei’s worldview and radical Shi’ite Islamist ideology appears to be wearing thin among many Iranians, whose main goal these days is economic survival, and achieving a reasonable standard of living.

Responding to Khamenei’s statements, U.S. Secretary of State Mike Pompeo noted Monday that Iran allowed many flights in from China during the outbreak in that country, ignored “repeated warnings from its own health officials, and denied its first death from the coronavirus for at least nine days.”

“It is important to note that since 2012, Iran has spent over $16 billion on terror abroad, and used sanctions relief from the JCPOA to fill up its proxies’ coffers. Regime officials stole over a billion Euros intended for medical supplies, and continue to hoard desperately needed masks, gloves, and other medical equipment for sale on the black market,” Pompeo said.

Not long ago, Iran was sending around $1 billion a year to Hizballah, Hamas, and other terror organizations, while spending tens of billions of dollars on its military and terror activities in Syria. Current Iranian overseas military and terror financing figures are not immediately available, but it is difficult to imagine how Tehran can keep up this level of funding for its foreign destabilization projects.

The Iranian regime recently took the unprecedented step of asking the IMF for a $5 billion loan, revealing the extent of its economic crisis. Iran’s request for help from an international financial institution marks a complete break with its past policy, and reflects the urgency that its decision makers feel in regards to economic problems.

The Islamic Republican Guards Corps controls between 20 and 40 percent of the Iranian economy, according to estimates, a factor that likely further drives resentment among sections of the public.

As James M. Dorsey, a non-resident senior associate at the Begin Sadat Center for Strategic Studies recently noted, “Iran has become the poster child of what happens when the public distrusts a government that has a track record of being untransparent from the outset of a crisis, limits freedom of expression that often creates early warning systems that could have enabled authorities to take timely, preemptive measures to avert or limit the damage, and is perceived as corrupt.”

In the long-term, it remains unclear whether these dire conditions will force the regime to cut back on its long-term terrorist sponsorship and armament program for its network of radical proxies, but if it fails to do this, that might serve to only accelerate unrest at home.

In the meantime, a mysterious airstrike Sunday targeted Iran’s Albukamal military base on the Syrian-Iraqi border, a site reportedly used by the Quds Force to help traffic weapons and personnel from Iraq into Syria.

Pro-Iranian militias have been active in recent weeks in Iraq, launching a deadly rocket on a U.S. base, absorbing American air-strikes, and still continuing attacks afterwards.

While these incidents reflect an Iranian determination to still use its proxies against the United States and its allies in the region, they do not cover up the extreme position in which Tehran finds itself, a position that may yet grow more extreme once the coronavirus crisis passes.