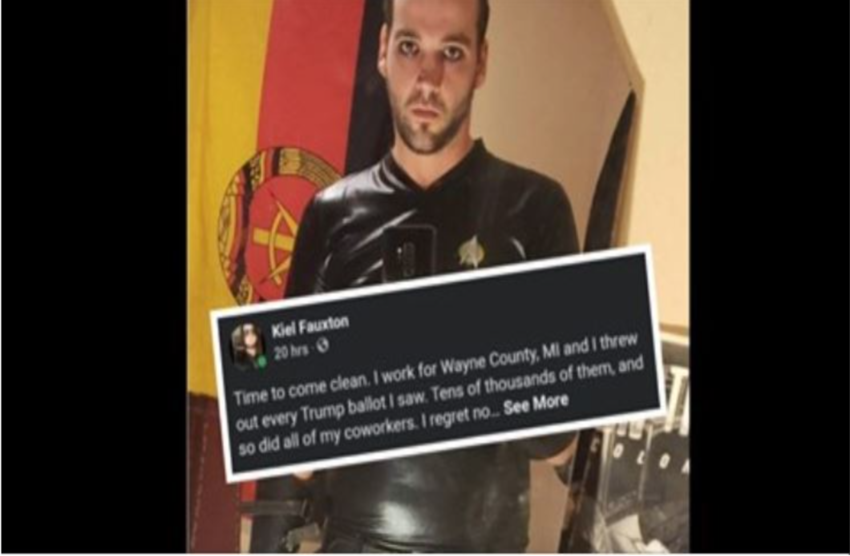 (That’s screwed up because Facebook won’t even allow me to have one account but of course I’m not liberal scumbag.)

Kiel Fauxton, who lists “Detroit, MI” as his residence on Facebook, also lists the Democrat Party as his employer on at least one of his Facebook pages.

take our poll – story continues below

Two days ago, Fauxton made fun of people who expressed concern over an alarming post he made on one of his Facebook pages: “Time to come clean. I work for Wayne County, MI, and I threw out every Trump ballot I saw. Tens of thousands of them, and so did my coworkers. I regret no…”(see more)

Facebook users screenshotted his message and wrote, “This fool needs to be arrested,” and “Fair election work from a self-proclaimed Marxist.”

Fauxton did not refute his statement but instead asked, “Why do they always say ‘self proclaimed Marxist” you can just say marxist”

We cannot confirm the authenticity of his claim, but we can confirm that after Fauxton’s message started to circulate on Facebook, two of his three accounts went missing. The original message we got on Facebook when we clicked on his account said that the content isn’t available, but now two of his accounts, including the one where he bragged about stealing Trump ballots, have disappeared. The account that lists Fauxton as a Cuban resident is still active.

Fortunately, before Facebook shut down two of his accounts, we were able to capture several screenshots.

In the post below, Fauxton reposted a photo that was originally posted by “Mandy Leigh,” who said, “There’s something inherently funny about this picture of a bunch of college Republicans “protesting” to try to stop the ballot count. Fauxton, the guy who just bragged about throwing out tens of thousands of Trump ballots, mocked the group of young Republican kids, saying, “Detroit really showin up” Missing Trump ballots aren’t a myth, as the media would like you to believe. On Thursday, we wrote about Detroit resident Audrey Lee, who requested an absentee ballot on the same day as her daughter. Audrey and her daughter both got their ballots on the same day. The mother and daughter filled out their ballots on the same day. Audrey voted for Trump, and her daughter voted for Joe Biden. They both drove together to deliver their completed ballots to a ballot drop box located at the Grace Grace Church in Detroit. Audrey placed her ballot in the dropbox first, and then she dropped her daughter’s ballot in the dropbox. After the election, the Joe Biden vote by Audrey’s daughter was recorded as “received,” Audrey’s ballot, however, had a line where the date under “Ballot received” should have been recorded. According to Lee, when she went to the website to recheck her status, on the following day, her status on the Wayne County, MI government website changed to show that the clerk has not yet recorded receiving her absentee ballot application. THIS ELECTION WAS COMPLETELY RIGGED AND WE DEMAND A RECOUNT! ABSOLUTELY THE MOST CORRUPT ELECTION EVER, DON’T GIVE GIVE UP THE FIGHT-WE WILL PREVAIL!

By Patty McMurray at 100Percent FED Up!

*Some additional material was added. 😁

Let us know what you think in the comments below!

Be sure to join us at SPREELY , CloutHub, WeGo, Gab, Codias, Mumblit and Vomvos!

When you share to your friends you greatly help distribute our content. Please take a moment and consider sharing this article with your friends and family. Thank you, we appreciate it!

The leftists at Facebook decided they didn’t like our message, so they removed our page and are censoring us. Help us fight back and subscribe to our newsletter so that you can stay up-to-date with everything Facebook doesn’t want you to see!