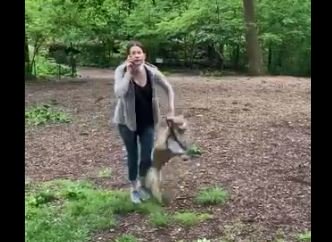 Amy Cooper called the cops on a black man and pretended like she was being threatened.

Then choked her dog.

Another “Karen” was caught on camera in New York City’s Central Park this past weekend calling the police after a black man told her to leash her dog — which is the law in Central Park.

She did this all while choking her adopted Cocker Spaniel.

Oh, when Karens take a walk with their dogs off leash in the famous Bramble in NY’s Central Park, where it is clearly posted on signs that dogs MUST be leashed at all times, and someone like my brother (an avid birder) politely asks her to put her dog on the leash. pic.twitter.com/3YnzuATsDm

The woman was later identified. And her Cocker Spaniel has an Instagram account (oh_henry_spaniel) although it is no longer available!

Her name is Amy Cooper pic.twitter.com/0UXOtNDhrC

Late Sunday the Abandoned Angels NYC Cocker Spaniel Rescue posted a tweet saying the choked dog was back in their care and in good health.

The owner gave it back to the shelter.

And later today Amy Cooper was fired as an investment banker.

A white woman dubbed ‘Central Park Karen’ has been fired from her senior position at a New York investment firm after a video showed her calling the cops on an African-American man who asked her to put a leash on her dog.

Amy Cooper, 41, was terminated from her job as head of insurance investment solutions at Franklin Templeton on Tuesday, having been placed on administrative leave a day earlier.

Earning up to an estimated $170,000 per-year, the company came to the decision following an internal investigation into footage of Cooper hysterically dialing 911 on former Marvel Comics editor Christian Cooper, 57, on Monday, claiming ‘an African American man is threatening my life’.

‘Following our internal review of the incident in Central Park yesterday, we have made the decision to terminate the employee involved, effective immediately,’ the company said in a tweeted statement. ‘We do not tolerate racism of any kind at Franklin Templeton.’