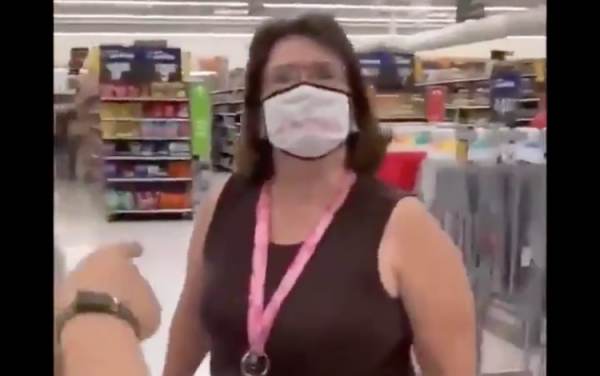 A crazy mask Karen went berserk in a Post Falls, Idaho Walmart over the weekend when she spotted customers without their faces covered.

The enraged, overweight woman began screaming at a group of teenagers: “You guys are abusing your freedom! Stop it!” the woman screamed as she punched the teen boy who was recording her with his cell phone.

“You think this is cute not wearing a mask,” the obese man said. “Get a damn mask and put it on your face.”

The teen boys showed incredible restraint and remained polite during the confrontation and assault.

According to North Idaho News, the teen’s parents called the police and pressed assault charges.

The teen’s mother, Jill Dickinson told North Idaho Exposed in an interview that she was angry when she saw the video of the woman assaulting her son.

“My blood was boiling,” she said. “We live in a country that we have freedoms. We have liberties. For my kids to walk into Walmart and get apprehended and accosted the way they did – it’s uncalled for.

“Walmart did nothing about it,” she said. “The employees — some of them stood around laughing – mask shaming with this couple.”

The irony of an obese couple lecturing young teens on health.

God bless the parents for pressing charges and standing up for our freedoms.