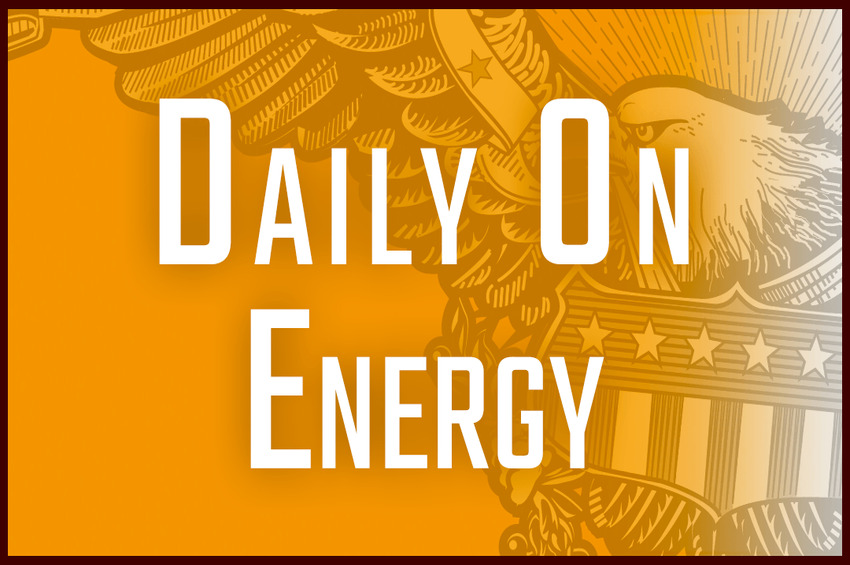 Subscribe today to the Washington Examiner magazine and get Washington Briefing: politics and policy stories that will keep you up to date with what’s going on in Washington. SUBSCRIBE NOW: Just $1.00 an issue!

ONE MAN’S CASE BOOSTING NUCLEAR 100 TIMES OVER: Bret Kugelmass has a blueprint to save nuclear energy across the world, and it doesn’t involve building smaller advanced reactors or addressing the issue of nuclear waste.

“Some of the problems we think might be issues aren’t holding back the industry,” Kugelmass told Josh in an interview. “Economics is the real issue.”

Kugelmass, a robotics engineer from Stanford with a background in developing electric cars for Panasonic and rovers for NASA, introduced his latest project Tuesday, what he calls the world’s first open-source blueprint for the design, construction, and financing of nuclear power plants.

The project is a product of the Energy Impact Center, a D.C. shop he founded that seeks to find “accelerated pathways” to decarbonize the global economy by 2040.

Kugelmass argues expanding the use of zero-carbon nuclear is crucial to achieving that goal, calling for one hundred times more of it. His push comes as Democrats running for president debate the role of nuclear power. While most candidates agree it has a role until renewables are more widespread, frontrunner Bernie Sanders has called for shutting down existing plants and not building new ones.

Back to the basics: The most economical and efficient way to expand nuclear, Kugelmass says, is to construct more plants similar to the first wave of civilian plants built in the U.S. in the 1950s and 60s. But only one new reactor has been completed in the last three decades in the U.S., with recent projects canceled or delayed because of mounting expenses.

“The trend toward building ever larger and more complex reactors has made nuclear energy uncompetitive,” Kugelmass said.

To address that problem, he and his team conducted 1,500 interviews at more than 100 nuclear sites across 15 countries with experts across technology, industry, economics, and policy.

His resulting blueprint recommends that rather than pursuing overly complicated and proprietary designs, companies should use a simpler, more streamlined process focusing on standardization and speed of delivery.

“The biggest insight is to not try to invent anything new technology-wise but to fix the construction and deployment problems that are getting worse and worse,” Kugelmass said. “While we love advanced reactors, they aren’t solving the cost problem because they are making systems more complex and less standard.”

Taking his model overseas: Kugelmass acknowledges he does not expect to see large new nuclear plants built in the U.S., where demand for electricity is stagnant. Instead, he is promoting his ideas to countries in Southeast Asia, Africa, and Eastern Europe that are looking to transition off coal with cleaner alternatives but still need “baseload” power.

Welcome to Daily on Energy, written by Washington Examiner Energy and Environment Writers Josh Siegel (@SiegelScribe) and Abby Smith (@AbbySmithDC). Email [email protected] or [email protected] for tips, suggestions, calendar items, and anything else. If a friend sent this to you and you’d like to sign up, click here. If signing up doesn’t work, shoot us an email, and we’ll add you to our list.

TRUMP’S NEPA CHANGES UNDER PUBLIC SPOTLIGHT: Business groups are uniting for a full court press in support of the Trump administration’s effort to speed permitting reviews under the National Environmental Policy Act for infrastructure projects.

“We need to modernize NEPA and we need to do it now,” said Thomas Donohue, the CEO of the U.S. Chamber of Commerce, at a press conference Monday hosted by a coalition of industry groups dubbed the Unlock American Investment Coalition.

The White House’s Council on Environmental Quality is hosting the second of two public hearings Tuesday on the NEPA changes proposed last month, which call for limiting reviews to two years while making it more difficult for environmentalists to challenge projects in court.

The clean energy argument: Business groups and allies are highlighting how infrastructure could allow for an easier build-out of clean energy projects, such as wind farms — especially offshore — transmission lines, and pipelines to assist carbon capture on power or industrial plants.

“We are the cusp of becoming the global leader on offshore wind,” said Erik Milito, president of the National Ocean Industries Association. “Everything is lined up — everything but NEPA.”

A potential vulnerability: Democrats and environmental groups who agree with the concept of improving permitting processes say the industry position is disingenuous because it ignores another component of the NEPA changes that seek to limit agencies’ consideration of climate change by not requiring them to measure a project’s “cumulative” environmental impacts and “indirect” effects.

“Taking away those requirements would prohibit agencies from considering the impact to air quality — or water quality — from a proposed project,” said Sen. Tom Carper, the top Democrat on the Environment and Public Works Committee, in his prepared testimony for Tuesday’s public hearing. “Simply put, it makes no sense.”

Burden on business: Chad Whiteman, the Chamber’s vice president of environmental and regulatory affairs, told Josh in an interview Monday that his group supports the Trump administration’s attempt to “clarify” how to account for greenhouse gas emissions under NEPA, which could reduce the burden on courts that have been left to interpret agencies’ obligations. He said he expects companies to voluntarily conduct a climate evaluation, even if they aren’t required to do so.

“If you talk to a lot of the folks that are represented [here], they are incorporating sustainability provisions, they are trying to find ways to reduce their carbon footprints, they are committing to large reductions by 2030 and net-zero by 2050,” Whiteman said. “So they are already moving in that direction.”

DRILLING DOWN ON OIL AND GAS CAMPAIGN DOLLARS: Oil and gas companies use their campaign contributions to reward politicians who vote their way, rather than try to influence their votes ahead of time, new research says.

The study from researchers at Yale University and the University of Cambridge parsed oil and gas campaign contributions in 14 election cycles, and they found a strong connection between lawmakers’ votes against environmental regulation and industry contributions the next election.

For example, lawmakers in the 2016 cycle received an additional $5,400 in campaign donations from the oil and gas industry for every additional 10% of votes blocking environmental regulation in 2014, the research finds. The study used League of Conservation Voters’ environmental scorecard to categorize lawmakers’ votes.

Why does this correlation matter? Oil and gas companies are big spenders in elections.

In 2018, oil and gas companies spent $84 million in campaign contributions. That number is even higher during presidential election years, said Matt Goldberg, a postdoctoral associate at the Yale Program on Climate Change Communication and a lead author on the study. Already this cycle, the industry has spent $40 million, he told Abby.

Goldberg said it’s good news the industry isn’t overtly attempting to buy votes. But he added, “Most Americans are concerned about climate change, and the fact that these people get into office being boosted by oil and gas is very troubling.”

What’s next for research? Goldberg says he may explore whether climate advocates are taking a similar strategy as the industry, rewarding lawmakers for their votes with campaign contributions.

A BAN ON GAS BANS: The Arizona state government wants to preempt local bans on new natural gas infrastructure before they’re even proposed.

Arizona Governor Doug Ducey, a Republican, recently signed into law legislation that would block cities and towns in the state from denying permits “based on the utility provider proposed” and from passing codes or ordinances with “the effect of restricting a person’s or entity’s ability to use the services of a utility provider.”

In other words, Arizona cities now won’t be able to follow in the footsteps of municipalities in California and in the Northeast that have blocked new natural gas infrastructure and gas appliances in new buildings.

Arizona cities haven’t floated any gas bans yet: But this legislation ties their hands if they want to limit fossil fuels in the future to meet climate and clean energy goals. Phoenix, for example, has a goal to slash emissions by 80% below 2012 by 2050, with an interim goal of a 30% cut by 2025.

The natural gas industry, though, celebrated the legislation, which was pushed by Southwest Gas, as ensuring the Arizona public maintains the ability to choose which sources of energy they use. “Arizonans will now have the opportunity to take advantage of all the energy options offered to them, including the comfort and savings of natural gas,” American Gas Association CEO Karen Harbert said in a statement.

Consumers Energy says by 2040 it will shutter all its coal-fired power, slash carbon emissions by 90% below 2005 levels, and provide energy for its customers with 90% clean resources.

In 2019, the Michigan utility’s portfolio included 31% natural gas and 20% coal. By 2040, Consumers Energy envisions zero coal, only 10% natural gas, no nuclear, and 56% renewables, according to the plan released Monday. The utility will also rely heavily on energy efficiency (22%) and battery storage (12%).

“We don’t have all the answers yet, but our Clean Energy Plan is a great state,” said Patti Poppe, Consumer Energy’s president and CEO, in a statement. “We have the know-how and the time to continue innovating and creating to solve this problem.”

The deal between Exxon Mobil and Chart Industries will enable the U.S. to “export even more LNG to India,” Trump said in a joint press statement with Modi upon wrapping up his first trip as president to India.

Modi agreed that the U.S. has become a “very important oil and gas source” for India, noting the $20 billion in total energy trade between the two nations over the last four years. That exchange of energy also includes “new” sources such as renewables and nuclear, Modi said.

OREGON REPUBLICANS REPEAT NO-SHOW ON CAP-AND-TRADE BILL: Nearly all Republican state senators in Oregon refused to show up to vote on a Democratic cap-and-trade bill, in a repeat of a boycott tactic the GOP used last year.

At Monday morning’s floor session, just one Republican showed up, the Oregonian reported. State law requires a two-thirds majority of all senators to be present in order for the body to vote on resolutions or legislation. Senate President Peter Courtney, a Democrat, decided to adjourn the chamber until Tuesday.

If passed, Senate Bill 1530 would slowly decrease the limit of carbon emissions that companies in the state are allowed to create and make companies apply for “emission allowances” with the state government.

A vote on the cap-and-trade bill is not expected until Wednesday at the earliest.

Axios JPMorgan Chase to pull support for some fossil fuels

Los Angeles Times Most California cities refuse to retreat from rising seas. One town wants to show how it’s done