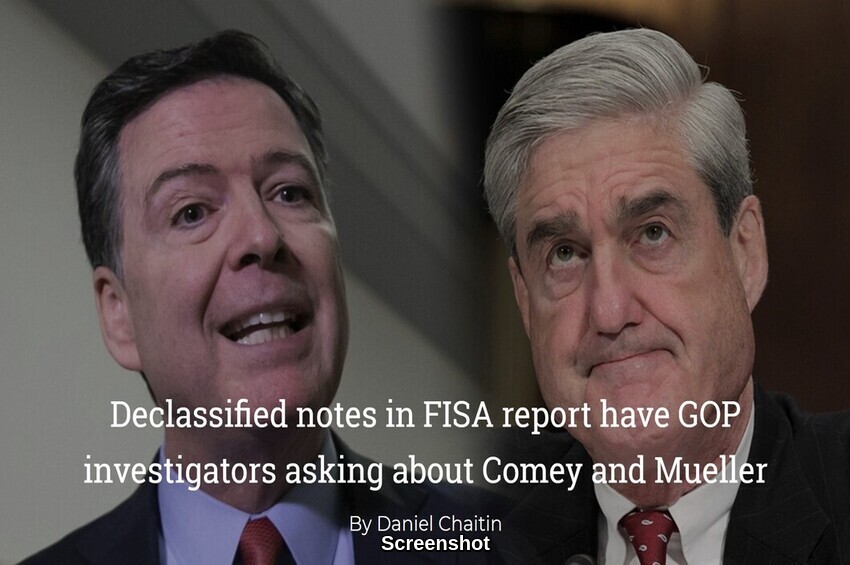 That’s what Republican investigators are asking after the declassification of footnotes in a Justice Department inspector general report, showing the FBI received classified reports in 2017 which identified that parts of British ex-spy Christopher Steele’s anti-Trump dossier were likely influenced by Russian disinformation.

DOJ watchdog Michael Horowitz determined last year the FBI properly opened its counterintelligence investigation, known as Crossfire Hurricane, into potential ties between the Kremlin and Trump campaign in the summer of 2016, but GOP concerns are more focused on the dossier being used to obtain Foreign Intelligence Surveillance Act warrants against Trump campaign associate Carter Page and why leaders such as Comey insisted Steele’s research be included in the 2017 intelligence community assessment on Russian election interference.

One burning question, according to Wisconsin Sen. Ron Johnson, is why Comey refused to allow his security clearance to be reinstated, allowing him to avoid questions about classified information that Horowitz wanted to raise for his audit of the Russia investigation. 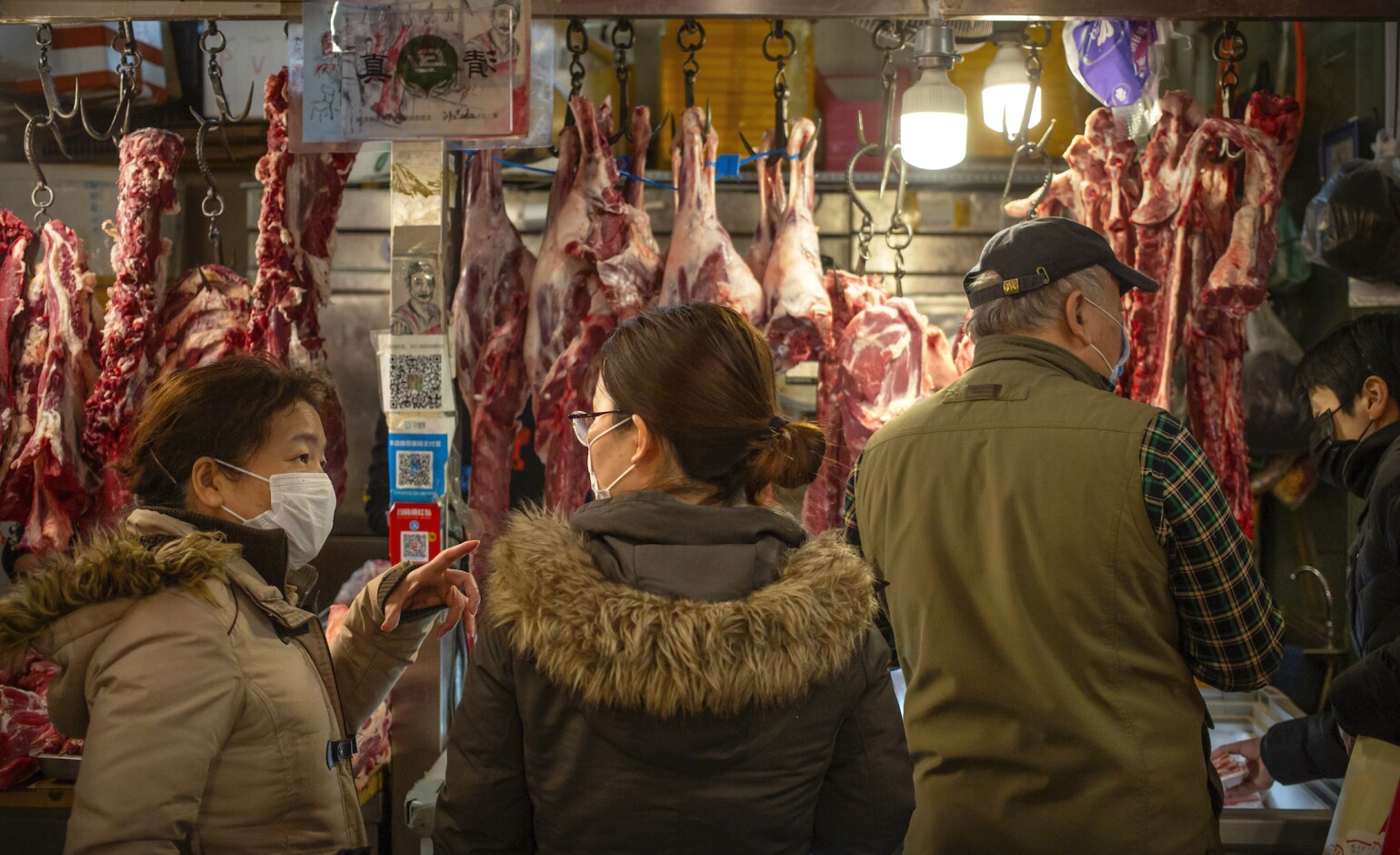 “Why did former FBI Director James Comey and former FBI general counsel James Baker refuse to have their security clearances reinstated before they were interviewed by the inspector general? Was it so they wouldn’t have to explain this information?” Johnson, the Senate Homeland Security Committee chairman, wrote in a Wall Street Journal opinion piece published on Friday.

This very issue is “one of the problems” in Horowitz’s investigation, Attorney General William Barr said in December. But it is not one that can’t be solved. Barr suggested U.S. Attorney John Durham, who is conducting a review of the Russia investigation, could secure cooperation where the inspector general could not. “Someone like Durham can compel testimony, he can talk to a whole range of people, private parties, foreign governments, and so forth,” Barr told NBC News.

Horowitz’s report was released in December, criticizing the Justice Department and the FBI for at least 17 “significant errors and omissions” related to the FISA warrants against Page in 2016 and 2017 and for the bureau’s reliance on Steele’s dossier. But only now are some of the footnotes being publicly disclosed after Johnson and Senate Finance Committee Chairman Chuck Grassley pressed the Justice Department and later acting Director of National Intelligence Richard Grenell for their unmasking.

Steele put his research together at the behest of the opposition research firm Fusion GPS, funded by Hillary Clinton’s presidential campaign and the Democratic National Committee through the Perkins Coie law firm. Comey told Donald Trump, who was the incoming president at the time, about the salacious claims about him in the dossier during an early January 2017 meeting at Trump Tower.

Comey defended himself against allegations that the FBI committed “treason” and illegal surveillance of the Trump campaign back in December 2019. “All of that was nonsense,” he said in a Fox News Sunday interview. He did admit, however, that Horowitz identified “real sloppiness” on the part of FBI agents.

Comey has yet to comment on the declassified footnotes revealed this week — though he did knock President Trump’s coronavirus response on Saturday. But this hasn’t stopped Republicans from tying Comey’s name into the controversy as often as possible, along with the names of other former top bureau officials. “The FBI got played — the Steele Dossier was Russian disinformation. We suspect that Comey, [former FBI Deputy Director Andrew] McCabe, Baker, [former FBI agent Peter] Strzok, and [former FBI lawyer Lisa] Page knew all along. But they didn’t care because they were out to get the President,” Rep. Jim Jordan, the top Republican on the House Judiciary Committee, tweeted on Saturday.

Comey’s name was also dragged through the mud by Republicans this week after new evidence emerged that George Papadopoulos denied the Trump campaign was involved in the hacking of the Democratic National Committee — potentially exculpatory evidence that appeared to never have been relayed to the Foreign Intelligence Surveillance Court in the Page case despite being recorded by an FBI source — in the weeks before the 2016 election.

Mueller, too, is on their radar. Soon after Comey was fired by Trump in May 2017, Mueller was appointed to be the special counsel overseeing the Russia investigation. Dubbed a “witch hunt” by Trump and his allies, Mueller’s team did not find a criminal conspiracy between the Trump team and Russia but did lay out possible instances of obstruction of justice that were seized on by Democrats last spring.

Now as Democrats warn that Barr and Durham’s investigation could be an effort to discredit Mueller, Republicans are raising questions about what Mueller knew about the newly revealed classified reports that cast aspersions on Steele’s dossier and when.

“These notes beg question of when FBI learned of Russian disinfo in dossier+what did they do about it?? Why did they keep renewing spying authority with this info? What did Mueller know and when? Did we even need Mueller?” Grassley, an Iowa Republican, said in a tweet, echoing similar questions in Johnson’s opinion article.

“More declassification is needed for the public to get the whole story but this is a good start,” House Intelligence Committee ranking member Devin Nunes said on Friday.

Some of the answers GOP investigators seek may be revealed to the public soon.

A letter from Assistant Attorney General Stephen Boyd to Grassley and Johnson said that one of the four footnotes they wanted declassified could not be uncovered at this time. However, he noted the agency “continues to review and consider the possibility of further declassification or summary substitution.”