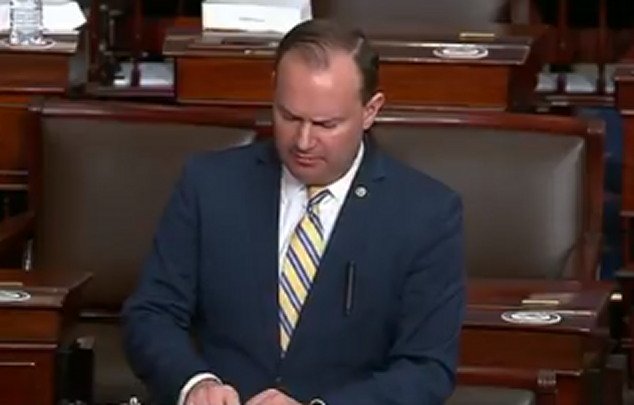 Republicans in the Senate, led by Mike Lee, introduced a resolution this week, condemning mob violence.

And Democrats blocked it.

Democrat Senator Bob Menendez even denied the existence of such violence.

Sen. Mike Lee accuses Democrats of being on the side of ‘dimwitted’ violent protesters

Sen. Mike Lee charged Senate Democrats with being on the side of violent protesters he described as “dimwitted, phony drama addicts” for opposing his resolution Thursday condemning “mob violence” in the wake of nationwide demonstrations over the police killing of George Floyd.

The Utah Republican’s comments came on the Senate floor during a heated debate with Sen. Bob Menendez after the New Jersey Democrat objected to the resolution, effectively killing it.

Menendez wanted to add a line saying specifically the president should not incite violence or legitimize those who engage in hate-fueled acts, noting President Donald Trump recently retweeted video of someone yelling “white power” and white people pointing guns at peaceful protesters.

People are being shot! Businesses are being looted. Innocent Americans are being attacked and threatened. Lives are being ruined. Communities are burning! And democrats refuse to condemn mob violence. pic.twitter.com/9moGpQ6MbC

Democrats like the mobs because they know they are on their side.

Senate Democrats just objected to a simple resolution condemning mob violence in our streets. People are being shot. Businesses are being looted. Communities are burning and Democrats are refusing to condemn this behavior! https://t.co/NZEIAsbz8G

Mike Lee stands up and condemns mob violence, defends the vast majority of police officers, who are good people.

Remember this in November.