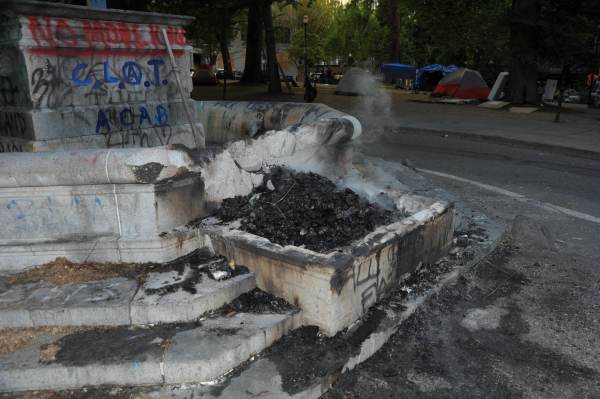 On the 98321048973242th consecutive night of protests in Portland, the demonstrators attempted once again to set up an “autonomous zone” similar to the debacle that transpired in Seattle. The Portland communists must be losing their touch, because they’ve unable to match their counterparts to the north, as the police repeatedly dismantle the zones and send the protesters running. This time, they attempted a hostile takeover of the same parks that were taken over during Occupy Portland.

Authorities on Thursday closed a pair of downtown parks that are hubs for Portland protesters.

About 5 a.m., Portland police announced the closure of Chapman and Lownsdale squares, which sit across Southwest Third Avenue from the Multnomah County Justice Center and federal courthouse. Officers combed through the parks about 10 minutes later, moving people to the north.

Portland police said nine people were arrested and booked into jail. They’re accused of a combination of trespassing, interfering with a police officer and disorderly conduct charges, according to police.

Protesters have gathered nightly in the area since late May, demonstrating in the wake of the Minnesota police killing of George Floyd, and an encampment cropped up this week across the street from the federal courthouse.

Authorities descended on the encampment Wednesday morning, clearingstreet blockades and reportedly telling people camped out in Lownsdale Square to leave.

Portland police said the parks are closed to the curb lines that surround them. Workers were putting a fence around Lownsdale Square on Thursday morning.

The parks will remain closed until needed repairs are made and the parks are ready to reopen for all to enjoy. The Police Bureau will assist