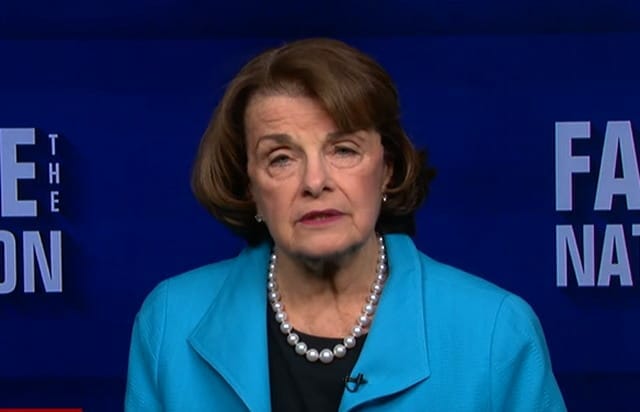 Democrats have spent the last few years proclaiming that all women must be believed.

Now that their candidate has been accused during an election, everything has changed.

Now they would have us believe that they never said believe all women and that they support due process. They think no one remembers their behavior during the Kavanaugh hearings.

And so many Democrat women are standing by Biden.

Feinstein Blasts Tara Reade: ‘Where Has She Been All These Years?’

Senator Dianne Feinstein (D., Calif.) on Thursday attacked former Joe Biden staffer Tara Reade, who alleges she was sexually assaulted by Biden in the spring of 1993.

Feinstein said the allegations were “totally different” than those against Supreme Court justice Brett Kavanaugh.

“Kavanaugh was under the harshest inspection that we give people over a substantial period of time,” Feinstein told CNN on Thursday. “And I don’t know this person at all [Reade] who has made the allegations [against Biden]. She came out of nowhere. Where has she been all these years? He was vice president.”

How can Feinstein doubt Reade publicly with a straight face?

I have no idea if Tara Reade is telling the truth or exaggerating something that actually happened, but I do know that there's enough going on here that people like Dianne Feinstein saying shit like “well why didn't she come forth sooner?” should be a huge deal.

Dianne Feinstein had no problem airing unsubstantiated allegations against Brett Kavanaugh. And yet, this. https://t.co/brzt5oTefL

This cartoon says it all:

I almost forgot that political cartoons could be this good. #ouch pic.twitter.com/VvBg6IDS1W

The hypocrisy is just stunning, isn’t it?