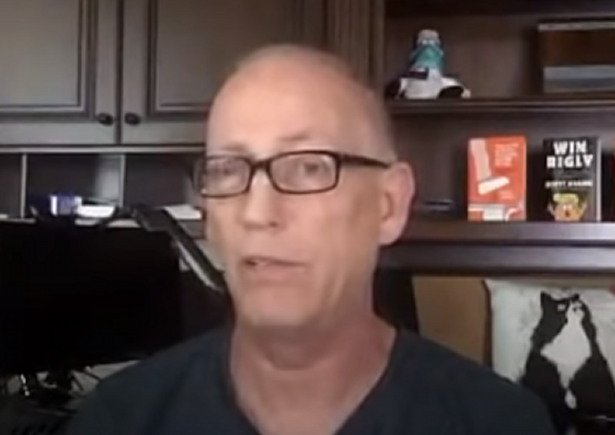 Scott Adams, creator of the iconic ‘Dilbert’ cartoon series, was one of the first high-profile figures in America to suggest Trump would win in 2016.

He has stuck with Trump for the last four years and has been a vocal critic of the Democrats.

In one of his recent podcasts, he offered some thoughts about the 2020 election and Joe Biden.

He did not hold back.

Scott Adams, the creator of ‘Dilbert’ and a student of persuasion, explains why he thinks that Joe Biden citing the 2017 “fine people” in Charlottesville “race hoax” during his DNC acceptance speech disqualifies him from being the president, on his Friday morning “Coffee With Scott Adams” podcast.

Adams said “the fact that he based his campaign on being the guy of good character and the one who cares, while at the same time and in the same speech perpetuated the most divisive race hoax in American history — the fine people hoax,” is disqualifying for Biden.

“He’s basing his campaign on a debunked hoax,” he said. “What do people who believe the hoax say? ‘Oh, you right-wing crazy people are trying to tell us we didn’t hear it with our own ears. I saw it and I heard it and I can prove it. Here’s the video of what I saw and what I heard.’ And then, they’ll show the edited video — which is the hoax.”

Adams has been talking about this on Twitter as well:

Democrats are having an “Oh shit” moment realizing Biden is running on character while hawking the most debunked and racially divisive hoax in American history. This will sink him in the end. Worst campaign mistake I have ever seen. https://t.co/75Lcgcr3b9

By now, thousands of news people have double-checked the “fine people” transcript and realized it is a hoax as Biden tells it, if they didn’t already know. And they are having an “Oh shit” moment that is epic.

If Asshole Joe Biden really believes the Fine People Hoax, he’s too dumb to be president. If he knows it is fake and is using it to divide the country, he is too evil to be president.

Neither of those flaws is cancelled out by his ability to read in public or ride a bike.