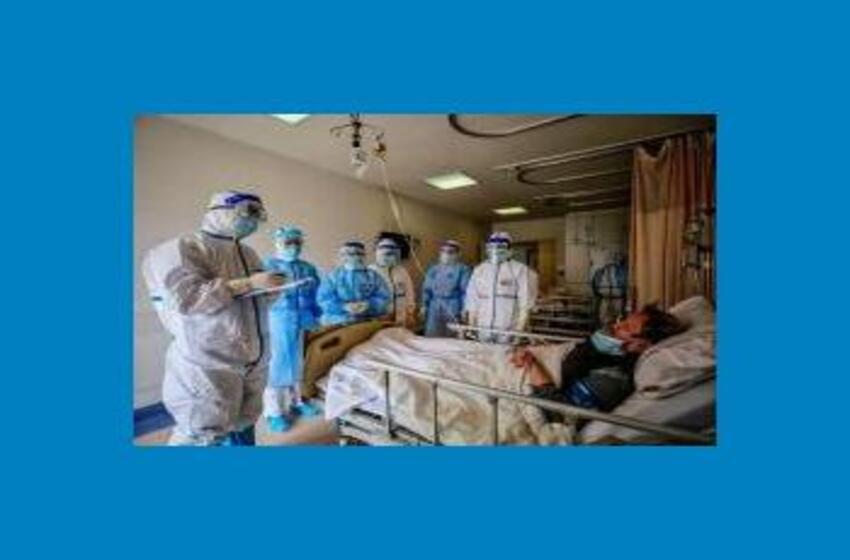 cnsnews Attachments3:10 AM (1 hour ago) to Susan, djoneses Hi Susan, Hope you’re doing okay there. We have talk here about potential lockdowns being ordered soon, so it’s all feeling a bit uncertain. But right now, we’re all good, right? I posted that Planned Parenthood story we spoke about earlier. take care. CAPTIONS: A COVID-19 patient in the Red Cross Hospital in Wuhan, China. (Photo by STR/AFP via Getty Images)

(CNSNews.com) – As Beijing continues to reject U.S. accusations that its early handling of the novel coronavirus outbreak made the situation worse, a senior State Department official on Wednesday evening contrasted China’s response to how U.S. authorities dealt with the H1N1 “swine flu” outbreak 11 years ago.

Within a week of the first case of H1N1 to be detected in the U.S. in April 2009, “we had sequenced it and shared it on a public space for everyone to see, and the world got on it right away,” the official told reporters in a briefing on background.

While that outbreak “still created lots and lots of havoc,” the official said, “there was no delay” and U.S. authorities “tried to maintain as open an environment as possible.”

“And I’m going to ask you put the H1N1 response against the current corona response.”

According to the Centers for Disease Control and Prevention (CDC), the first H1N1 flu case was identified in a child in Veracruz state, Mexico on April 12, 2009, and the first U.S. cases were identified in two children in southern California on April 15 and 17.

On April 18, the CDC reported the infections to the World Health Organization (WHO), and on April 24, the CDC uploaded the complete gene sequences of the new virus to a public international influenza database.

In the case of the novel coronavirus, a first patient in Wuhan experienced symptoms of the as-yet unknown illness on December 1 last year, according to a paper by two dozen Chinese experts. (Later Chinese government data indicates a first case may date back further, to November 17.)

Chinese health officials reported that a cluster of cases in Wuhan began on December 21, and on December 31 Chinese authorities informed WHO’s office in China.

‘We’re here to help. Let us know what we can do’

Chinese officials and state media have been asserting for weeks that China responded swiftly to the outbreak and cooperated fully and transparently with the international community.

But the senior State Department official noted the time it took China to allow the WHO and CDC to investigate the outbreak after it emerged in Wuhan.

“You guys can do the math, how long it took,” the official said. “Like, by my calculation, it took a month for the WHO to actually be allowed into the country to investigate.”

U.S.-donated masks and protective gear to safeguard against the coronavirus are loaded into planes for transport to Wuhan in early February. (Photo: UPS/State Department)

A partial timeline of the relevant period follows:

Jan. 27: WHO chief Tedros Adhanom visits Beijing. He returns from his visit two days later, praising President Xi Jinping and his government’s handling of the outbreak.

Feb. 2:  President Trump tells Fox News the U.S. has offered “tremendous help” to China in dealing with the epidemic. National Security Advisor Robert O’Brien tells CBS: “We continue to offer assistance to the Chinese. We’ve offered to send over CDC and other U.S. medical and public health professionals. And we have not heard back yet from the Chinese on those offers, but we’re prepared to continue to cooperate with them.”

Feb. 3:  Dr. Nancy Messonnier, director of the CDC’s National Center for Respiratory Diseases, tells a briefing: “We have folks ready to go to China … We are just waiting. As soon as we are allowed to go, we will be there.”

Feb 3:  Chinese foreign ministry spokesperson Hua Chunying tells briefing: “The U.S. government hasn’t provided any substantive assistance to us, but it was the first to evacuate personnel from its consulate in Wuhan …”

Feb. 10:  A three-person WHO advance team arrives in Beijing.

Feb 14: CDC’s Messonnier says CDC still has no information on whether its experts will be included in a 12-member team which the WHO says it plans to send to China.

Feb. 17:  A WHO team, including experts from CDC and NIH, arrives in China and visits three provinces but the epicenter of Wuhan and Hubei province is not initially on the itinerary.

The senior State Department official pushed back on suggestions that the Trump administration is picking fights with Beijing at a time when the U.S. and China should be cooperating.

“Believe me, we’ve tried,” the official said. “We’ve tried to cooperate when there was still an opportunity to resolve this, before it became a global pandemic. And again, if you check the record, it will show that we did not get that access or opportunity.”

The official recalled the U.S. offer – announced by Secretary of State Mike Pompeo on February 7 – of $100 million to help China and other affected countries.

“We did deliver 17.8 tons of equipment early on to Wuhan to help them, as we knew that they were having trouble with medical equipment and masks,” the official said, noting that the aid had been “donated by the very generous American people.”

Asked about the use by U.S. leaders – including Trump and Pompeo – of terminology such as “Chinese” or “Wuhan” coronavirus, the official said that was “a reaction to a very clear effort [by the Chinese government], that you all observed as well, to push the responsibility for this away.”

“The reason we want to make sure that the origins and the full story about what happened – the reason we want that to be out in the clear is so that not just China, but the world, can assess this, and then make plans and deal with it when it happens again,” the official said.

“We firmly oppose the U.S. deliberately linking the coronavirus with China, which is an act of stigmatization,” he told a briefing. “The WHO and the international community oppose stigmatizing linkage between the virus and specific countries and regions.”

Geng added that “shifting the blame to China will not help combat the epidemic in the U.S.”