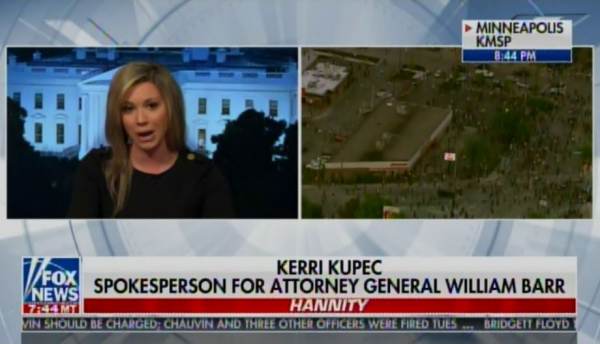 Department of Justice spokesperson Kerri Kupec joined Sean Hannity on Wednesday night to discuss the unmasking investigations by the DOJ and updates on the General Michael Flynn case.

Kerri Kupec told Sean the DOJ was asked to weigh in on the actions by Judge Emmet Sullivan in the General Flynn case.

Sean Hannity:  The DC Circuit invited the Department of Justice to weigh in following Judge Sullivan’s actions which are beyond unprecedented… Now the DOJ, will they weigh in?

Kerri Kupec:  So the DC Circuit has invited the Department of Justice to weigh in and we will do so.  We will reiterate the arguments we made in our brief — which we believe this case should be dropped.  Certainly as the prosecutors in this case as the Department of Justice we have the prosecutorial discretion to make that decision.  And Sean, Jeff Jensen, he’s the US Attorney who the AG appointed to review the Flynn case, ten years a career prosecutor also spent ten years in the FBI.  When he completed his review of the Flynn case, he told the Attorney General that based on what we now know he does not believe that any one of our 93 US Attorneys in the country would have continued to prosecute this case.

This should have been over two weeks ago.

Judge Sullivan is a disgrace.