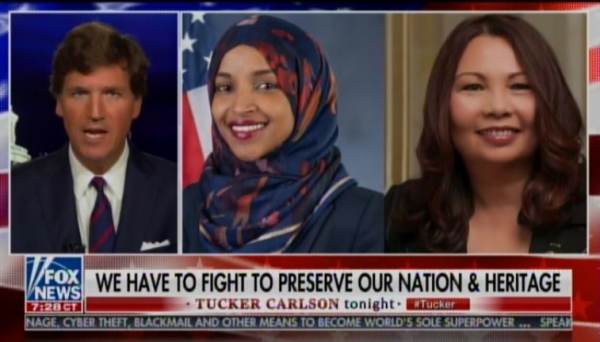 On Monday night Tucker Carlson blasted Senator Tammy Duckworth for suggesting that she is open to removing all statues of American founding father George Washington.

Duckworth made her remarks on CNN over the Independence Day weekend.

In response to Carlson’s remarks Senator Duckworth went to twitter and took a swipe at Tucker.

Rather than argue his points she attempted to shame Tucker Carlson over her disability.

Does @TuckerCarlson want to walk a mile in my legs and then tell me whether or not I love America?

But this did not stop Tucker, on Tuesday Tucker Carlson went after coward Tammy Duckworth again.

Tucker Carlson: We wanted to have an exchange like that with Tammy Duckworth tonight. So we called her office and invited her on the show. Her flack informed us that before even considering our request we must first issue a public apology for criticizing Tammy Duckworth. In other words, I will not debate you until you first admit you were completely wrong. Keep in mind that Tammy Duckworth is not a child. At least not technically. She is a sitting United States senator… Duckworth is too afraid to defend her own statements on a cable TV show. What a coward. She is also a fraud… Tammy Duckworth is a callous hack who ignored the suffering of actual veterans when it actually mattered. She has no moral authority. She is just a politician like the rest of them. She works for us. This is a democracy. She has an obligation to explain herself and answer our questions. And the first question would be, “How can you lead a country you despise?”

Tucker then lashed out at fellow Democrat Ilhan Omar.

Tucker Carlson: Hating America is a major theme in the Democratic party today… If anyone should love America it is Ilhan Omar. This country rescued her from a squalid refugee camp in Kenya… But Ilhan Omar is not grateful. She hates us for it. Watch Omar tell us it is time to dismantle our country… The problem is there are many of us who do like this country. We live here. We don’t want to destroy it. We have every right to fight for our nation, our heritage and our culture. And when vandals like Tammy Duckworth and Ilhan Omar tell us we are not allowed to question their patriotism even as they scream about how horrible America is, we have every right to laugh in their faces.