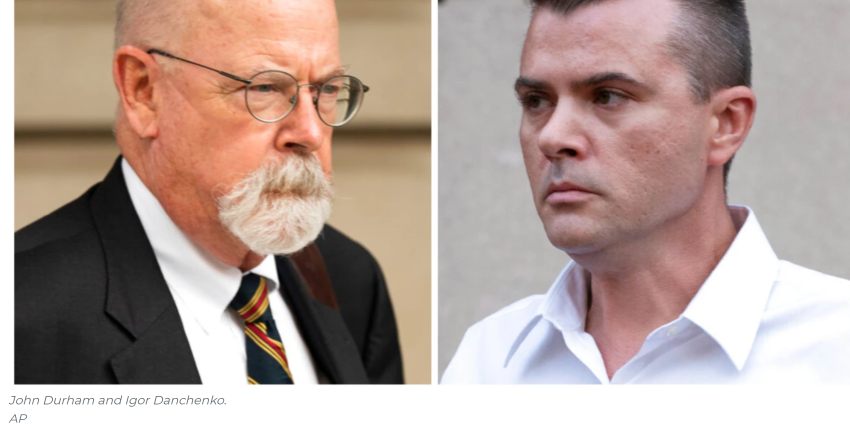 After losing his first and only other special counsel trial, John Durham‘s next, and perhaps final, major test begins this week against Igor Danchenko.

The Russian-born lawyer, who was British ex-spy Christopher Steele’s alleged main source for his discredited dossier, was charged last year with five counts of making false statements to the FBI, which Durham said he made about the information he provided to the former MI6 agent. Jury selection starts Tuesday.

The 2021 indictment said Danchenko anonymously sourced a fabricated claim about Trump campaign manager Paul Manafort to longtime Hillary Clinton ally Chuck Dolan, who spent years, including 2016, doing work in Russia. Danchenko also allegedly lied to the FBI about a phone call he claimed he received from Sergei Millian, a Belarus-born U.S. citizen and businessman who Danchenko claimed told him about a debunked conspiracy of cooperation between former President Donald Trump and the Russians, which the special counsel said was false.

Danchenko has pleaded not guilty.

Durham appears to be nearing the end of his criminal investigation, with his grand jury in the nation’s capital reportedly expiring recently, so the Danchenko trial may be his final shot at redemption in a courtroom after losing another false statements case earlier this year. But the judge handling the case has indicated the trial may be difficult for the special counsel.

Judge Anthony Trenga, who is presiding over the Danchenko case, ruled in late September that he wouldn’t dismiss Durham’s indictment, but he expressed skepticism about the charges. The judge said he would revisit his ruling after Durham’s team had presented its full case during the trial. Trenga, a George W. Bush appointee who has sat on the Foreign Intelligence Surveillance Court, added, “I think it’s an extremely close call, particularly with count one,” which is related to the charge tied to Dolan.

The special counsel has previously highlighted how Danchenko was the subject of what he said was a botched FBI counterintelligence investigation as a national security threat from 2009 to 2011, and Durham wanted findings from that investigation, which unearthed links between the defendant and Russian intelligence officers, to be used at trial. But Trenga denied Durham’s request last week.

The judge also denied the special counsel’s request to provide evidence showing Danchenko allegedly misled about the sourcing for the unfounded “pee tape” claims that Steele put into his anti-Trump and Democratic-funded dossier, as well as limited a host of other evidence Durham had sought to show the jury related to Danchenko’s alleged propensity to fabricate sources or be dishonest.

Danchenko was on the FBI’s payroll as a paid confidential human source from March 2017 to October 2020 before he was charged in November 2021. Despite the false statements charges, the Russian lawyer’s team told the court the jury will hear evidence the FBI was happy with Danchenko’s work for them and that the bureau used the information he provided to build cases and open investigations.

Steele was hired to put his dossier together by the opposition research firm Fusion GPS, which itself was hired by Clinton campaign general counsel Marc Elias. DOJ watchdog Michael Horowitz concluded that Danchenko undermined Steele’s unfounded claims of a “well-developed conspiracy” between Trump and Russia.

While the special counsel was often present in the courtroom during the unsuccessful trial against Democratic cybersecurity lawyer Michael Sussmann earlier this year, he never spoke, so Durham’s decision to take the lead in front of the judge at the Danchenko court hearings starting in early August has been a notable departure, and it seems likely Durham will play a significant speaking role during the trial beginning Tuesday. He has taken the reins after his team’s court loss in May.

Sussmann had been charged in September 2021 by Durham after reportedly concealing his two clients, Neustar Chief Technology Officer Rodney Joffe and Clinton’s 2016 campaign, from FBI general counsel James Baker when he pushed debunked allegations of a secret line of communication between the Trump Organization and Russia’s Alfa-Bank during a September 2016 meeting.

But a jury found Sussmann not guilty of the false statement charge following a trial in the nation’s capital.

Durham has obtained just one guilty plea, from former FBI lawyer Kevin Clinesmith, who admitted he falsified a document during the bureau’s efforts to renew surveillance authority under the Foreign Intelligence Surveillance Act against Trump campaign associate Carter Page. Clinesmith’s wrongdoing was revealed in Horowitz’s December 2019 report on FISA abuse.

Any other charges Durham may file remain unknown.

A Durham prosecutor said the special counsel’s team was “looking closely” at Joffe earlier this year, including pointing to a law on major fraud against the U.S. government, specifically mentioning a Defense Advanced Research Project Agency contract. But Joffe’s defense lawyer recently said he was alerted that Durham does not plan to press charges against his client.

Durham had said Joffe also began tasking employees and associates with mining and assembling internet data that would support an “inference” or “narrative” tying Trump to Russia, with the tech executive stating in emails that the goal was to please “VIPs” — apparently referring to Sussmann, Elias, and the Clinton campaign.

In a similar limitation on evidence, the judge presiding over the Sussmann case had instructed Durham’s team not to bring up the fact that Joffe had been cut off as an FBI source in 2021.

If Danchenko is indeed Durham’s final case, then his report will come next. The special counsel is reportedly working on finishing a lengthy set of findings laying out his investigation’s conclusions, which will be handed over to Attorney General Merrick Garland.

Garland testified to the Senate last October that “with respect to the report, I would like as much as possible to be made public — I have to be concerned about Privacy Act concerns and classification, but other than that, the commitment is to provide a public report, yes.”

“There will be no political or otherwise undue interference with the Durham investigation,” Garland said.