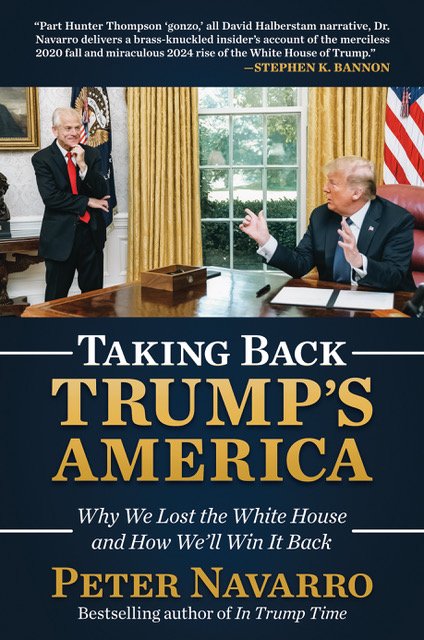 Dr. Peter Navarro’s latest book could not have come at a better time.  Navarro led the charge against the very real allegations of massive fraud in the 2020 election. And now we know how they stole it — through ballot trafficking and bloated voter rolls. The election was a farce, the greatest crime in US history. And Dr. Peter Navarrro never wavered in his stand.

Now, Dr. Navarro is back with his latest book, “Taking Back Trump’s America – Why we Lost the White House and How We’ll Win It Back.”

It is a must-read for Trump Nation.

We must do everything in our powers to ensure that there are only Trump Republicans who are in full command of ALL of the major leadership positions.

These positions include House Speaker, Whip, and Conference Chair along with the Chairs of all of the major Congressional Committees – starting with the all-important Judiciary and Ways and Means Committees.

“No RINOs allowed” must be our Capitol Hill battle cry. As we have repeatedly discussed in this book, there continues to be a fierce battle within the Republican Party between Republican In Name Only RINOs who derive their power from the Globalist lucre of Wall Street, Silicon Valley, and multinational corporate interests versus Main Street Trumpists who embrace Populist Economic Nationalism and insist on secure borders, fair trade, and an end to endless wars.

Here, it is absolutely critical that we Deplorables – along with President Trump – firmly insist on the forced retirement of both Kevin McCarthy as Republican Leader of the House and Mitch McConnell on the Senate side.

The only way these two leaders of the RINO pack have made their way up the greasy pole of Congressional leadership has been by raising massive campaign contributions from the very same Globalist corporate interests intent on taking down Donald Trump. McCarthy and McConnell have then these used this filthy lucre to help elect fellow RINO Congressmen and Senators who, in this Deep Swamp rite of passage, become beholden to McConnell and McCarthy and keep electing them as leaders.

This is a systemic failure; and it can only be addressed by taking out the current leadership trash. Remember here: Every fish rots from the head down. So the heads of McCarthy and McConnell must roll. (By the way, my favorite replacement for McCarthy would be Ohio’s Jim Jordan but there are others like Elise Stefanik who come readily to mind.)

The Tao of Trump

To make a Trump Republican House a reality in 2022, it all starts with Donald Trump. No one in political history has proven to be a more tireless and effective campaigner than the Boss; and he must go out and vigorously stump for every one of the candidates he endorses.

It follows that every candidate seeking Donald Trump’s endorsement must first and foremost publicly embrace the Trump Populist Economic Nationalist and the Tough on China policy agendas laid out in this book. This means a firm candidate commitment to:

• The onshoring of American manufacturing jobs with the urgency of a Manhattan Project;
• Secure borders and the equally swift completion of a big beautiful wall;
• The immediate deportation of all the illegal aliens entering the United States during the Biden regime;
• A swift return to strategic energy dominance;
• Cracking down on China’s economic aggression through tough tariffs and by cutting off the flow of American capital and technology to Communist China; and
• An end to Endless Wars.

Each Trump-endorsed candidate must also provide an ironclad commitment to:

• A Trumpian, Teddy Roosevelt-style busting of the Big Tech Cancel Culture Not To Be Trusted likes of Google, YouTube, Facebook, and Twitter;
• Putting all those responsible for the Russia Hoax in jail; and
• Holding the Chinese Communist Party – along with Tony Fauci — both morally and financially accountable for unleashing a bioweapon and pandemic on America.

Of critical importance, every candidate seeking Trump’s endorsement must likewise commit to getting to the bottom of both the stolen November 3rd election and the January 6th violence.

Regarding that fateful January 6th day, a truly big remaining question is why House Speaker Pelosi allowed the Capitol to be so lightly guarded and why the Pentagon chose to keep National Guard troops at such a far distance despite repeated warnings from President Trump himself of possible violence. And yes, there is also that collateral disturbing question based on mounting evidence as to whether FBI informants and Antifa/BLM agitators played major roles in instigating the violence.

The post EXCLUSIVE EXCERPT: “’No RINOs Allowed’ Must Be Our Capitol Hill Battle Cry” – Peter Navarro’s Latest Book a Must-Read for Trump Nation appeared first on The Gateway Pundit.