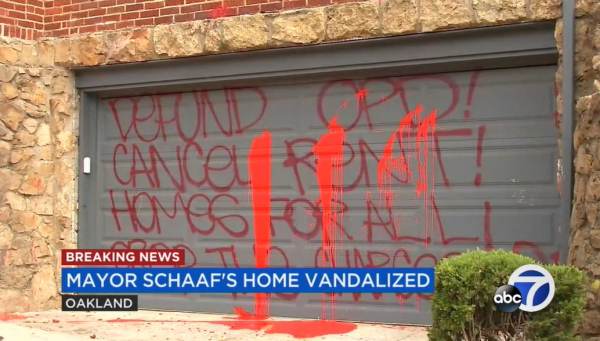 The home of far-left Oakland Mayor Libby Schaaf was shot with fireworks and vandalized with “defund the police” graffiti on Monday night.

Local station ABC 7 reports that “Witnesses say 30 to 40 people dressed in black and wearing masks shot projectiles and set off fireworks around 2 a.m.”

Some of the messages that were spray-painted on #Oakland Mayor @LibbySchaaf’s house include: “defund OPD! Cancel Rent! Homes for all! Drop the charges!” Someone spray painted “Blood on your hands” on the public sidewalk. There’s also some graffiti with expletives. @nbcbayareapic.twitter.com/7SsJ4k0F8w

Schaaf had ironically just been making the rounds on television blasting President Donald Trump and saying that “Oakland needs COVID relief – not troops – from our President.” Her comments were in response to the president’s discussion about sending federal officers to help get the riots there under control, like he did in Portland.

“We are not experiencing any civil unrest right now, but I can think of nothing more likely to incite it than the presence of Trump-ordered military troops into Oakland,” Schaaf tweeted.Oakland needs COVID relief – not troops – from our President. He should stop slandering diverse, progressive cities like Oakland in his racist dog whistles and divisive campaign tactics. pic.twitter.com/rcAOIMkkOf

“I know there’s a lot of unrest and frustration and I sympathize with that, but this was jarring and felt like to another level,” Schaaf’s neighbor who witnessed the attack on her home told ABC7.

In a statement about the incident, Mayor Schaaf said that “an attack at the home of a publicly elected official does not advance democracy.”