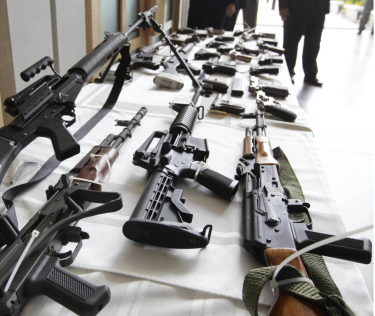 EXCLUSIVE — The FBI has secretly stripped eight more people of their rights to own, use, or purchase firearms , according to internal FBI documents obtained by the Washington Examiner.

Rep. Marjorie Taylor Greene (R-GA) and over a dozen GOP members of Congress in October demanded that the FBI and Justice Department hand over proof that the FBI is no longer waiving people’s gun rights with internal forms, which the Daily Caller uncovered in September had been signed by 15 people. Now, the Washington Examiner has obtained eight heavily redacted signed forms — indicating a more widespread bureau effort than previously known to target the Second Amendment rights of law-abiding citizens.

FBI AND DOJ MUST ‘REMOVE’ RECORDS ON PEOPLE PRESSURED INTO WAIVING AWAY GUN RIGHTS, REPUBLICANS SAY

“Americans can’t simply sign their constitutional rights away, even to the FBI,” Rep. Michael Cloud (R-TX), who signed the October letter, told the Washington Examiner. “As Republicans enter a House majority, we must use our investigative power to put a check on federal agencies who have proven to be eager and willing to crack down on Americans’ right to keep and bear arms.”

Through the forms, the FBI asked signatories to identify as a “danger” to themselves or others or lacking the “mental capacity adequately to contract or manage” their lives. The forms were presented by the FBI to people at their homes and in other undisclosed locations beginning in at least 2016 and until December 2019, when the FBI claims it was discontinued.

While two of the new eight forms have redacted dates for when they were signed, the other six are dated between March 2018 and April 2019.

The signed forms were obtained by Gun Owners of America, a firearms rights group, as part of its Freedom of Information Act lawsuit against the bureau to compel the disclosure of records. They were then shared with the Washington Examiner.

This includes the question of whether the form is legal in the first place — given that it did not move through the process mandated under federal law for government agencies to receive approval from the Office of Management and Budget before obtaining information from the public.

It also remains unclear how the FBI’s usage of the NICS forms aligns with the Gun Control Act of 1968, which outlines how someone may be barred from owning guns if he or she is “adjudicated as a mental defective or has been committed to a mental institution.”

But the act does not say people can rule themselves unfit to own firearms.

“The act is clear, and it says ‘adjudicated,'” John Harris, a lawyer who directs the Tennessee Firearms Association, told the Washington Examiner.

Like the NICS forms previously reported on, the latest batch obtained by the Washington Examiner does not list the names of signatories. The prior forms were accompanied by documents showing that the FBI used them in Massachusetts , Michigan, and Maine.

But it is unclear where the eight new forms were signed.

It is also unclear what sort of background the people who signed the eight forms had. The forms reported on prior included records showing that signatories were those who allegedly made violent threats in person, in online chat rooms, and on social media.

“While the initial reports were alarming enough, as GOA dug deeper, things just kept getting worse,” Erich Pratt, senior vice president of GOA, told the Washington Examiner. “We thank Ms. Greene and all the members who joined her in demanding answers for this damning breach of the public trust, and we look forward to assisting in any possible way as investigations into this matter develop in Congress.”

The existence of more signed forms could further compel House Republicans, who will have a chamber majority, to investigate the FBI’s usage of them in the next Congress. Rep. Jim Jordan (R-OH), who is poised to become chairman of the House Judiciary Committee, said in September that he was planning oversight in connection to the forms and other alleged bureau issues.

Rep. Andrew Clyde (R-GA) sponsored a resolution in November that would demand that Attorney General Merrick Garland provide records on the FBI forms. However, Democrats on the House Judiciary Committee rejected that measure on Wednesday, the Washington Examiner reported.

The vote occurred during a hearing in which committee members debated a bill sponsored by Rep. Pramila Jayapal (D-WA) called the Preventing Suicide Through Voluntary Firearm Purchase Delay Act.

Jayapal’s bill, which is co-sponsored by Reps. Ken Buck (R-CO), John Curtis (R-UT), and Raja Krishnamoorthi (D-IL), would legally permit people to add themselves to the NICS database — thereby forfeiting their rights to own, use, or buy firearms.

The bill demonstrates the glaring problem with the FBI previously obtaining signatures on its forms since lawmakers are essentially recognizing there needs to be congressional approval to engage in what the FBI already did, according to Aidan Johnston, director of federal affairs at GOA.

“The FBI just made something up and began implementing it,” Johnston said. “It has deprived these people of their rights by some made-up unconstitutional process.”

Sign up now to get the Washington Examiner’s breaking news and timely commentary delivered right to your inbox.
LAW ENFORCEMENTDEPARTMENT OF JUSTICESECOND AMENDMENTFBIFIREARMSNEWSGUN CONTROLGUNSLAW
Share on: